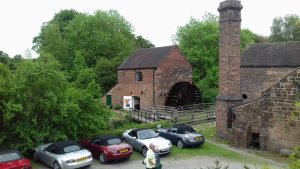 Not a long run, but that was great, to give us more time to chat and get to know our group over a picnic. Twenty cars (27 when Alex joined us at the coffee break) once again Moorlands at Owler Bar did breakfast eaters proud, not to mention tea’s and coffee’s.

The sun was shining down on us as we set off, through Fox House, Hathersage, turning left at the Travellers Rest Pub and heading towards Bradwell. Everybody and their Grandma’s were out on their bikes, it’s a long time since I have seen so much LYCRA. As we passed through Miller’s Dale the road was closed, but after a bit of negotiation (I think £5 pounds was mentioned … JOKE) they let us through. We had to put our hazard lights on, not quite sure why, as nothing was coming the other way. We went a bit wrong in Monyash, but after doing a U TURN we were soon back on track, and soon reached the Carriages coffee shop.

After everybody had a good natter we set off towards Ashbourne, through Biggin, Hartington and down into Ecton, just so THE BOYS could blast their horns, hear their exhausts, and race through THE TUNNEL (boys and their toys). The roads were very narrow and very bumpy, we were a bit concerned about Lesley’s recently broken ribs.

We found 5 MX5’s seeming a little lost, so Rob took the lead and we soon found ourselves at Cheddleton Flint Mill, near Leek. The weather had turned a bit dull with rain in the air, but what’s a bit of rain, chairs came out to enjoy our picnic. Some of the men fetched their umbrellas, but by this time the rain had stopped. 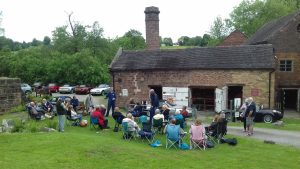 A Trust Member and volunteer John Outram came to give us an interesting talk, explaining a little about the Mill, first recorded in 1253 to grind corn and was powered by water by the original working water wheels from the River Churnet. In the 18th Century the mills were converted to grind flint for the pottery industry, it was then taken on the canal to Stoke on Trent to the pottery mills. There was no admission charge just a voluntary donation was requested. 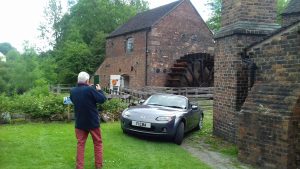 We walked into the cottage to find things that our grandparents would use. The old lady who owned the cottage (98) and still alive was living in a cottage across the way.

It was a lovely day. Thank you Burton and Lesley. The rain did come back and boy did it rain on our way back home, but that didn’t matter, it had stayed fine for most of the day