It was a good turn out for the run up to Holy Island.  It was a little cloudy, and we passed through some rain on the way up North, but when we arrived it was blue skies and pleasantly mild.  This was a blessing, as in the past few years we’ve battled gales and rain, so we weren’t going to complain about a few clouds today!

Our friends from Scotland came down, and we all cracked on with putting up the event shelters.  The barbecues were lit, but most people opted for a picnic. Obviously playing it safe given the difficulty we have had lighting the BBQs in the past few years…  One ingenious member decided there was going to be none of that messing around with matches and disposable barbeques, and so arrived at the meet with a gas powered barbeque bolted to the boot lid of his Mk1 Gleneagles!  Hasten to add that no MX5 was damaged in the making of this invention!  The BBQ was bolted on to a spare boot lid, and obviously it was removed from the car to be used on the day!  Lighting a BBQ on top of a petrol tank isnt recommened really. Risk assessment completed. 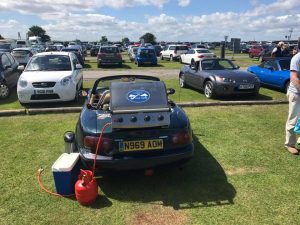 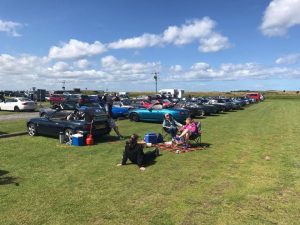 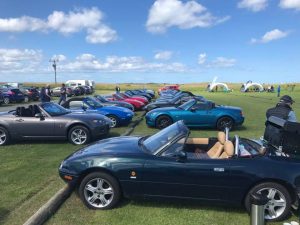 After food and chatter, the England v Scotland rounders match begun.  Scotland were wanting to win to regain the title taken by England in magnificent style last year.  The teams fought hard, and England was again victorious.  Also a member had donated an inscribed rounders bat, which was presented to the winning team by the Scottish AC.  Better luck next year Scotland….