The Race of Rememberance 2017

This is the 4th year of this unique, commemorative endurance race in support of Mission  Motorsport. A day/night 12 hour endurance race at the circuit on Anglesey, and each year it gets bigger, better and more popular. The sole aim of Mission is to race, retrain and recover injured servicemen who have through war and conflict while serving Queen and country been severely disabled and often medically discharged from the Service. The charity, similar to “Help for Heroes” does an amazing job and deserves all the support they can get.
Birmingham, Autosport International – January 2014, and a hasty conversation led to the idea. Initially conceived as just a track day, but instead it was discussed and decided the Charity could stage an endurance race in November, and thus was born “Race of Remembrance”.
The 1st year a number of club racers got together at the season’s end, used what equipment may have been left from their racing season to support fellow racers at Mission Motorsport in aid of a very well worth Charity.Now in it’s 4th year, a 12 hour race, different classes, a starting grid DOUBLE the size of that first event.

It’s grown beyond anybody’s wildest imagination. And the profoundly moving and poignant Service of Remembrance remains at the heart of the event. Racing is temporarily stopped at 10.45am on Sunday morning when all drivers, mechanics, support crews and spectators gather in the pit lane for a very moving service. 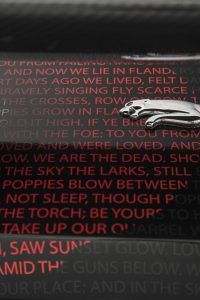 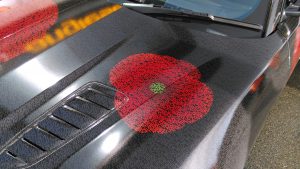 Click on photo to learn more about the The Poppy Car

A number of us from Peaks & Pennines went over for the weekend to witness and enjoy some exciting racing in both daylight and darkness on Saturday evening.
Because the endurance race is so long, and similar cars in each class, the place to make the most time on your competitors was in the driver change and pit stops. And these were orchestrated down to the last detail.
Every member of the support crew had their job to do, and to be done in a professional manner overseen by the Team Manager! The teams use very sophisticated communication systems to stay in touch with the driver and keep him fully informed of everything going on in the race that concerns their car, including being able to call the car back to the pit.
At driver change/pit stops the car has to be stationary for a mandatory 4 minutes minimum.But the mechanics cannot work on the car while it is being refuelled! For obvious safety reasons, and this led to some very professional and state of the art fueling rigs to reduce refuel times. None more so than our friend and Peaks & Pennines tech night guru… Paul Roddison who entered his Mazda MX5 Mk4. I am pleased to say the modifications that Paul has made to the troublesome gearbox gremlins which have been problematic for two full seasons, are cured and the powertrain ran faultlessly for the entire race!!
Sadly, a broken exhaust in the latter stages of the race which required a lengthy pit stop to reweld the exhaust put Paul back, but he finished a creditable 2nd in Class after leading class by 6 laps before pitting. Another great weekend away, Burton and Lesley had the motorhome there, Lesley holding “open house” the kettle on permanently and a welcome shelter from the mixed weather over the weekend. Burton was working as part of the support crew for Paul Roddison’ team which had Dan Welch of BTCC fame and Jon Halliwell this year’s Max5 champion as his support drivers.

Something different, in a wonderful part of the Welsh countryside, the views from the circuit were across the Menai Strait to Snowdonia beyond and snow had fallen on the mountains overnight Saturday, and the “picture postcard” views were stunning!!

‘What an epic weekend at Anglesey with MM Race of Remembrance 2017
Many thanks to everyone who made it happen you ALL contributed in getting OUR car across the line after completing a FULL 12hrs racing 1st in class…..So as to not upset anyone……We were the 1st car to run a full 12hrs with one car#endurance in the 2000cc class and the first Mazda having done that!!! ‘ 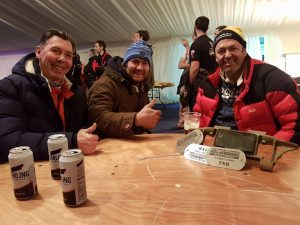 And a few comments from well-wishers

Rachel Armitage Not only where we the first MX5 across the line, we also kicked ass with the fastest lap, we didnt have four cars we had one which has been built to am amazing standard and completed 12 hour race with ease, well done lads!

Geoff Martin Brilliant. I can feel a sale if gearboxes coming on??

Jerrick Lo Awesome result, 12 hours of racing is no joke. Podium finish is worth celebrating for either way

Jason Young A pleasure as always mate. Cant wait for the next one ??????

Alan Robinson 12 hours on one gearbox is worth of a round of applause.
Great result and worthy of the effort you put in.

Andrew Bayliss Mega impressed that whatever you’ve done has worked. Mazda should be on the phone tomorrow.

Jon Earp Congratulations Paul, Jon, Dan & Team. We all thought the win was yours from the first lap, cruel turn of fate.

Clare Gaffoor Gearbox Goals! Cant imagine how much both fun and hard work you have all had this weekend. So much respect for all involved. Well done all!

Mark Theaker Another great weekend well done my pit crew its all about team work which we had O well done the drivers. Second in class despite mechanical failure and people trying to tarnish our reputation they had 3 attempts and guess what everything was above board why wouldn’t it be

Lee Hollin Excellent weekend with awesome mates as always! ?  This year was made a little more special for me personally, just what I needed! ?