Drive on water, swim through land – the amphibious MX-5

Cast your mind back to 2003 for a moment if you will – Top Gear was in its prime, the NB was nearing the end of production, and some of us had a little more hair! While these clearly major landmarks were going on a little company in New Zealand called Gibbs Sports Amphibians was creating the world’s first road legal amphibious MX-5  – the Gibbs Aquada. The early noughties were a fascinating time as technology was advancing faster than ever before and the world was becoming more and more connected, which allowed everyone to watch the emerging trend for amphibious cars. This trend was mercifully short lived, but we’re thankful for this car. 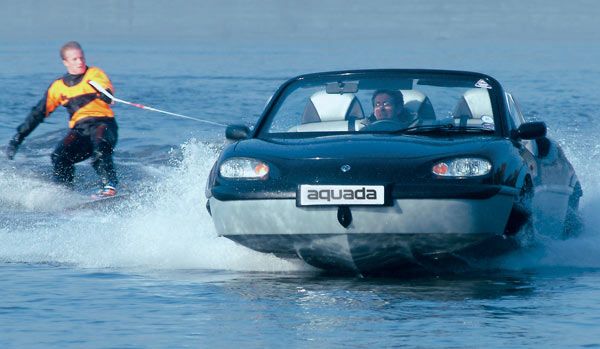 In true ‘go hard or go home’ fashion, Gibbs swung for the stars and created one of the better water dwelling offerings we’ve seen since 007 took his Lotus for a dip. The MX-5 is an obvious starting point for any vehicle as it’s practically perfect in every way, however for marine exploration the smooth lines and light weight of the NB were just the ticket for the Aquada. Unfortunately this is where the similarities between the Aquada and MX-5 end but there’s plenty more beneath the surface…

Powered by a 2.6L V6 Rover engine, the Aquada is certainly no slouch and has plenty of power to reach 110mph on land and 31mph (27 knots) on water. Technologically speaking this car / boat was newsworthy as 60 new patents were filed covering all of the technical innovations within. The Aquada was also the vehicle of choice in which Richard Branson certifiably smashed the record for crossing the English Channel by 4 hours 20 mins in a mere 1h 40 min 6 secs. You can tell people ‘an MX-5 is the fastest boat to cross the channel’ and you wouldn’t be inaccurate!

In 2003 if you wanted one of these unique 5s the asking price was £150,000 – the same as the hero of the day which was the Ferrari 575M. Would the Aquada have offered the same thrills as the Italian? I like to think so. Since the earth is covered by 70% water it does mean that there is a lot more space to enjoy the Aquada, and a lot less traffic for you.

Take a look at what AutoExpress had to say about this amphibious 5, and then have a look at some reviews and the car in action. Enjoy!