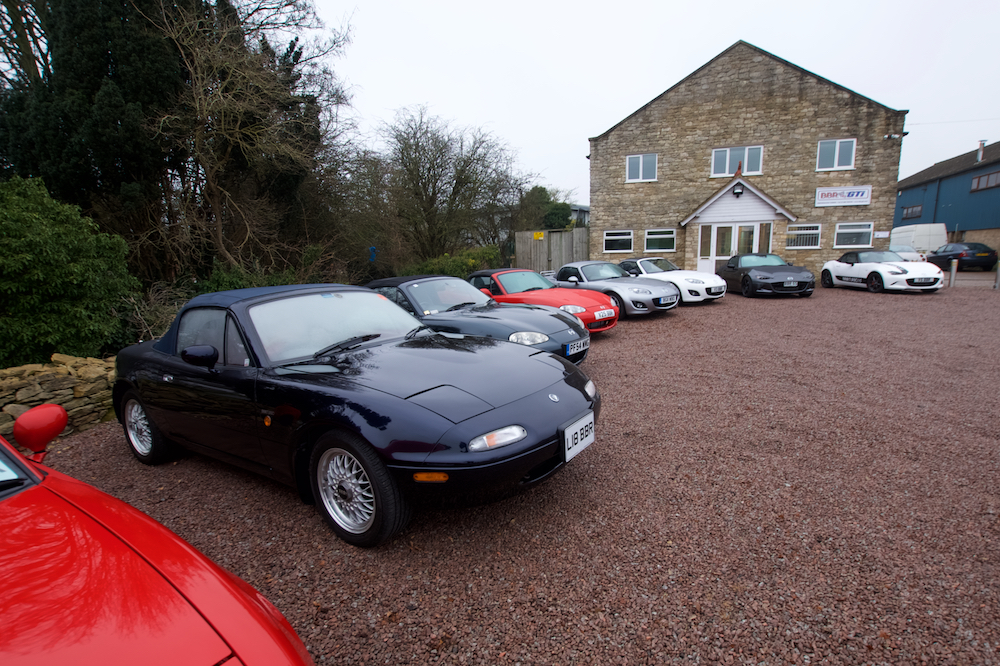 BBR have become synonymous with tuning the various iterations of the Mazda MX-5 platform, and have built a reputation as the go-to guys for those looking to extract a little more power from their rev-happy sports cars. Located in Brackley, in the heart of Motorsport Valley and literally a stones throw from the Mercedes-AMG Petronas Formula 1 team, the outfit has built a solid reputation for designing and manufacturing OEM quality conversions. On a cold and damp Tuesday morning, the MX-5 Owners Club editorial team made a visit for a workshop tour and inspection of the test fleet. 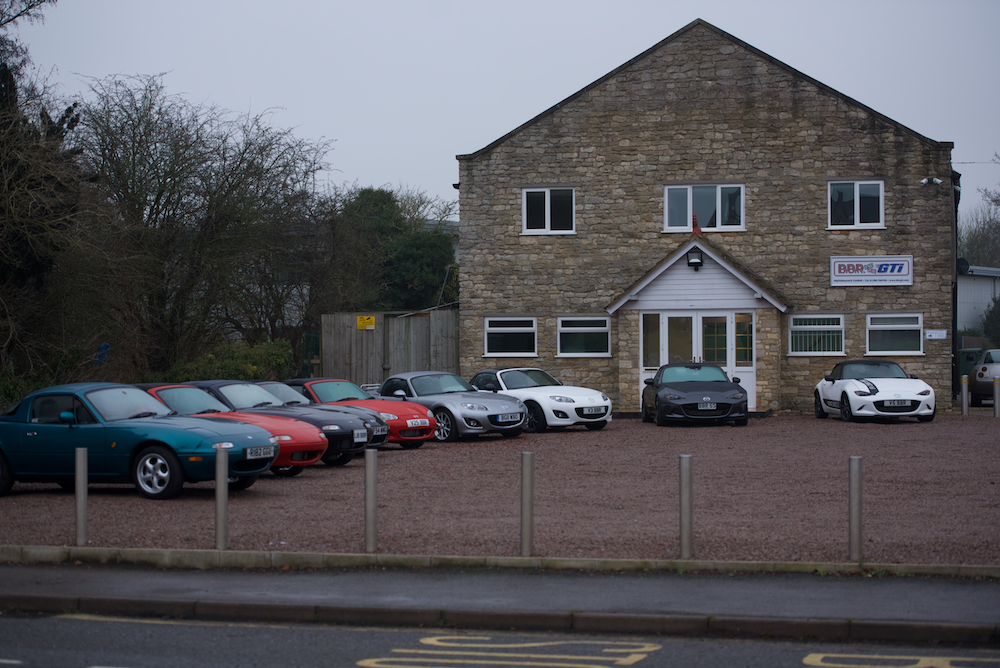 Oh yes, the test fleet. This isn’t the customer car park – this is BBR’s test fleet. 3x Mk1’s, 2x Mk2’s and another 2x Mk4’s (a 1.5 Roadster and a 2.0 RF). Each of these cars are fitted with the various naturally aspirated and turbocharged kits that BBR offer, allowing customers to get a real feel for the end product before they commit their pounds. 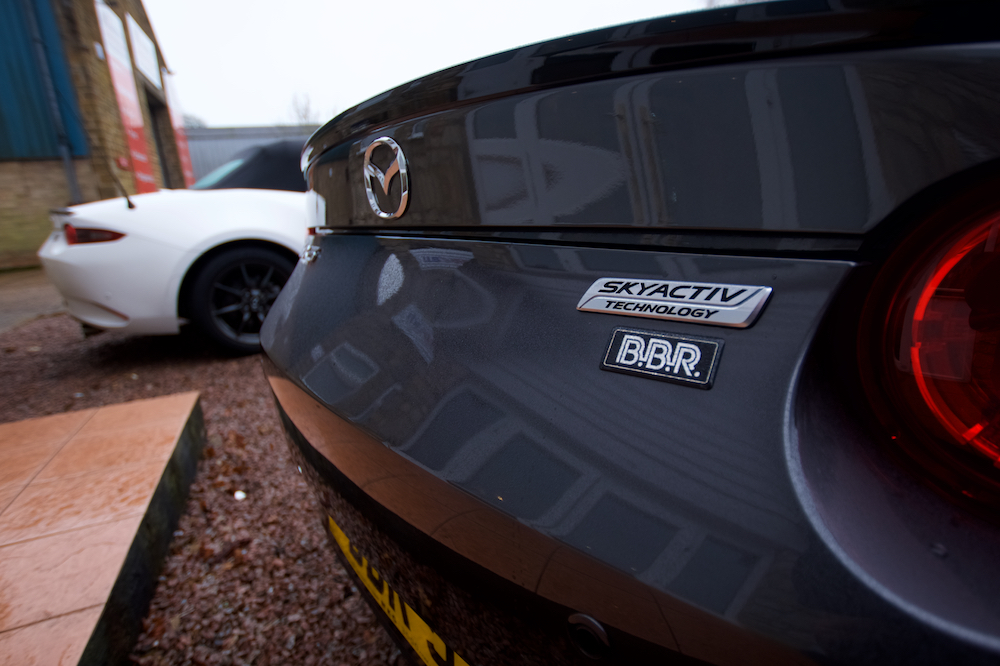 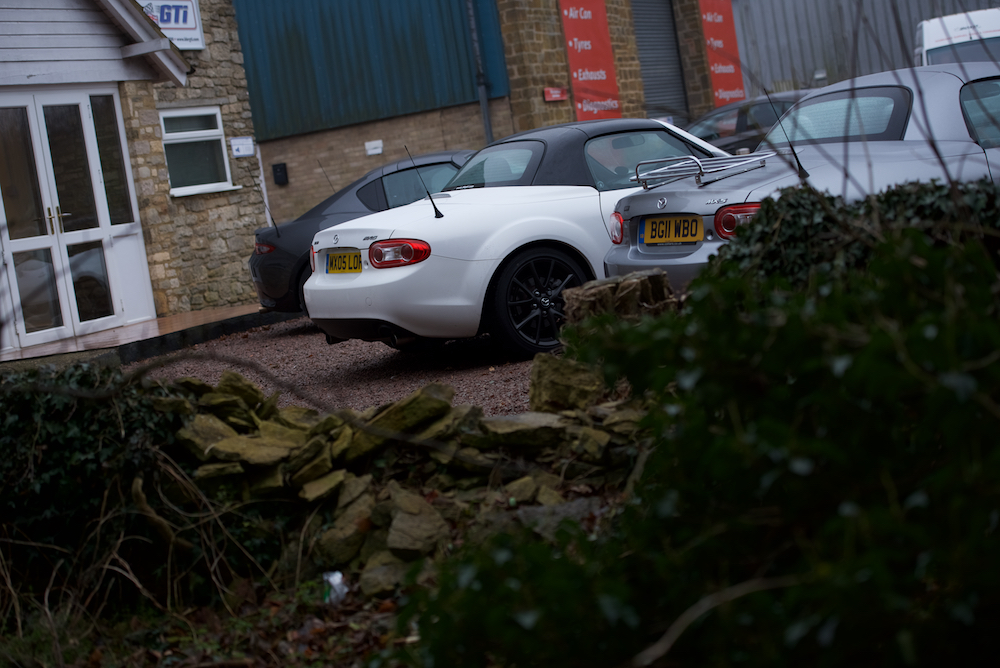 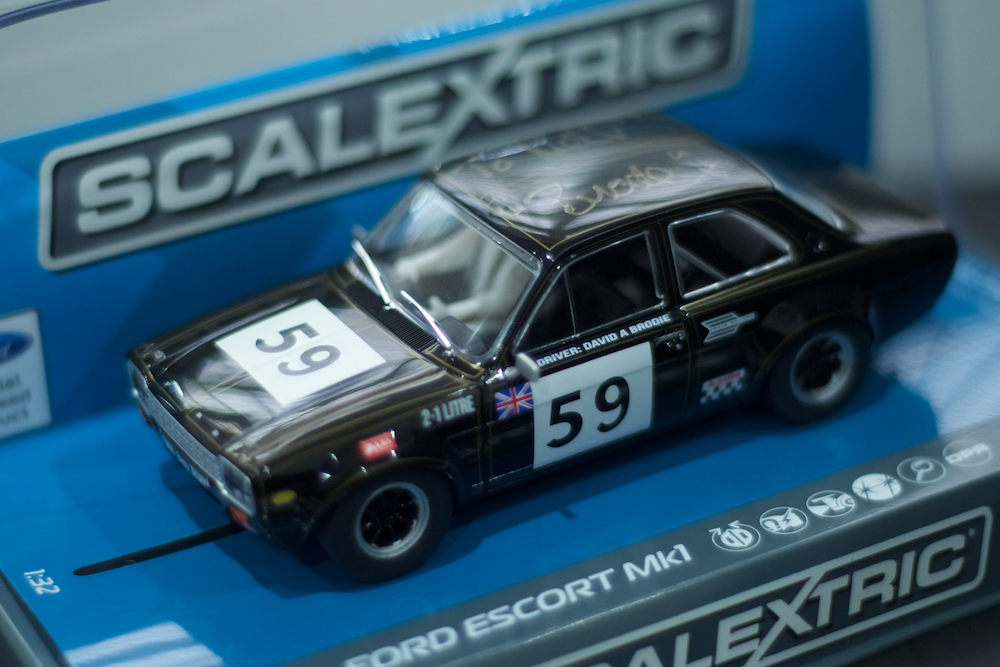 BBR was founded by David Brodie (you know that you’ve made it when Scalextric make a model of your period race car), who engineered one of the first turbo kits for the Mk1 in the nineties. He sold the business to Neil McKay, who merged it with GTI Engineering and took it to the next level. His kits are all designed, engineered, tested and installed in-house, and the BBR offering is a genuine OEM alternative. 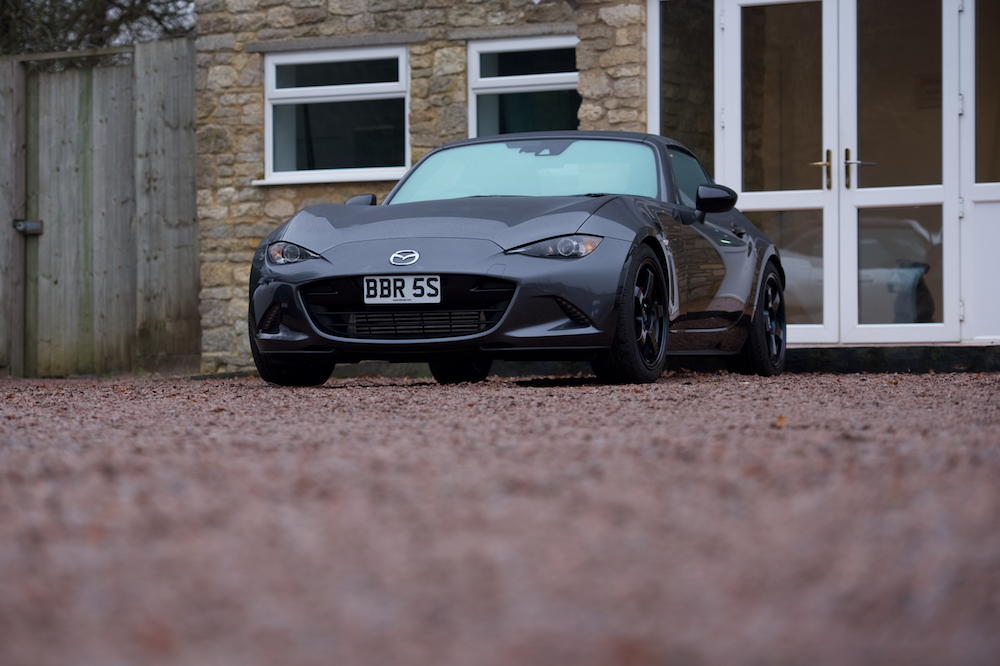 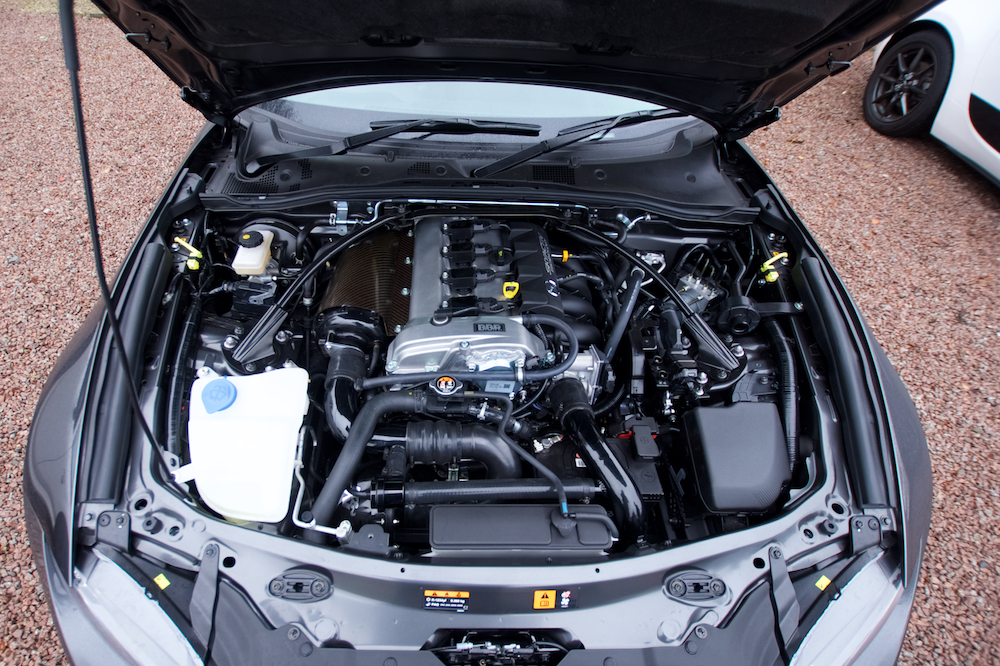 So professionally and beautifully is the install done that an average observer would hardly pick it, and the kit is fully reversible. The BBR Mk4 is faster than a Golf GTI, cheaper, and more fun. What’s not to like?

As a result, BBR find themselves converting several new Mk4’s with delivery mileage, often working on the cars before their lucky owner sets eyes on them. 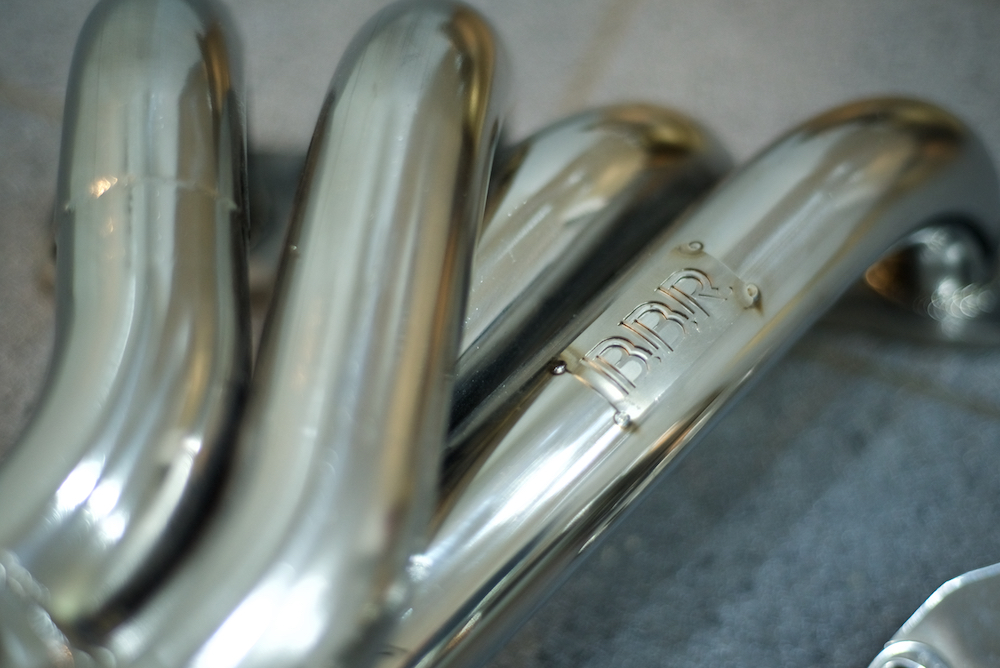 While BBR are certainly most famous for their turbocharged conversions, prospective customers don’t need to pursue this avenue. They also offer several upgrades for naturally aspirated cars such as hand made exhausts, intakes, ECU tunes and suspension and brake upgrades. 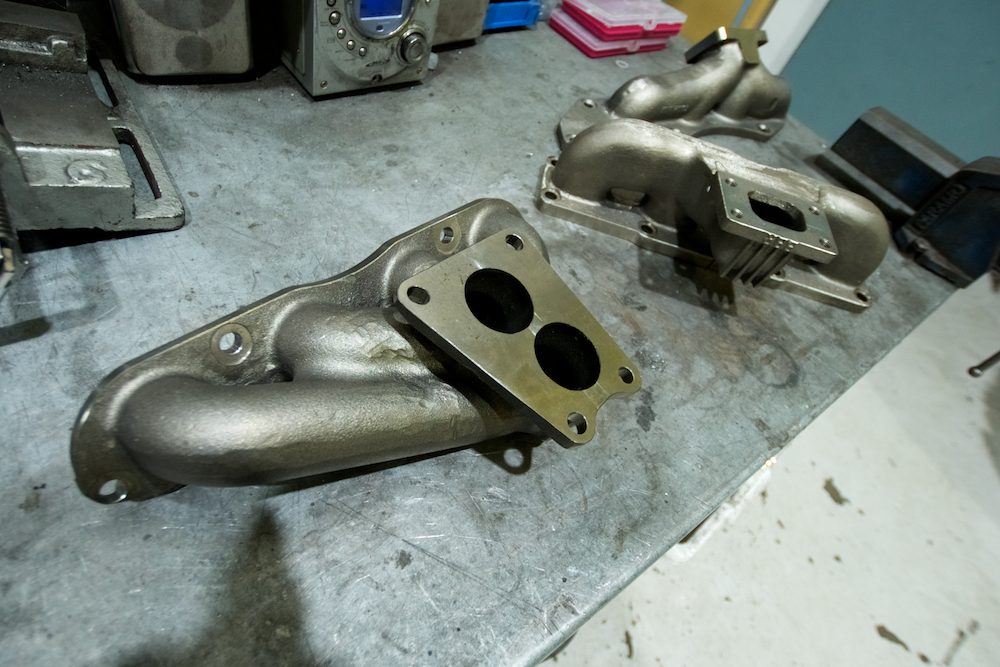 Their location in Motorsport Valley certainly helps with development. Need a manifold cast, or a carbon-fibre heat shield made? There’s always someone with the required skills just around the corner, and many of BBR’s suppliers also supply the Formula 1 teams. For example, the carbon heat shields on their Mk4 kit are made by a company who specialise in Formula 1 composites – the finish is stunning. 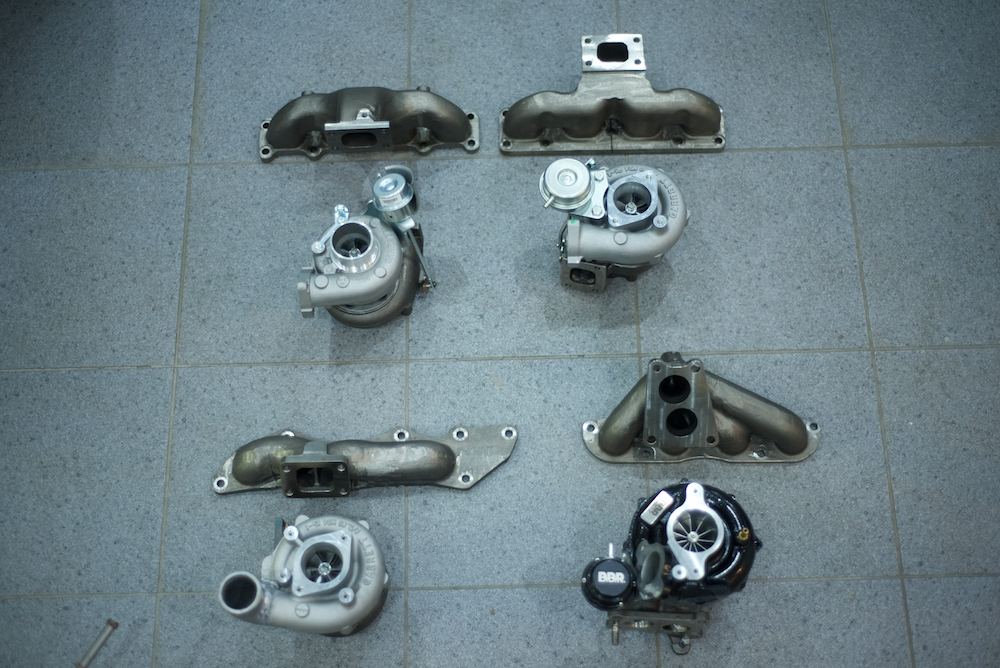 In this shot you can see how the BBR kit has evolved as the MX-5 has become increasingly complex (Mk1 top left, Mk2 top right, Mk3 bottom left, Mk4 bottom right). I wasn’t the biggest fan of turbocharged MX-5’s, as I always thought that they tended to loose the rev-happy, free spinning nature that makes them such a joy to drive hard. BBR agree, but have found that using a large turbo pumping low boost keeps the power and torque curves almost exactly the same as factory. The characteristics of the MX-5 remain very similar, but the numbers are bigger and the car is a lot quicker. 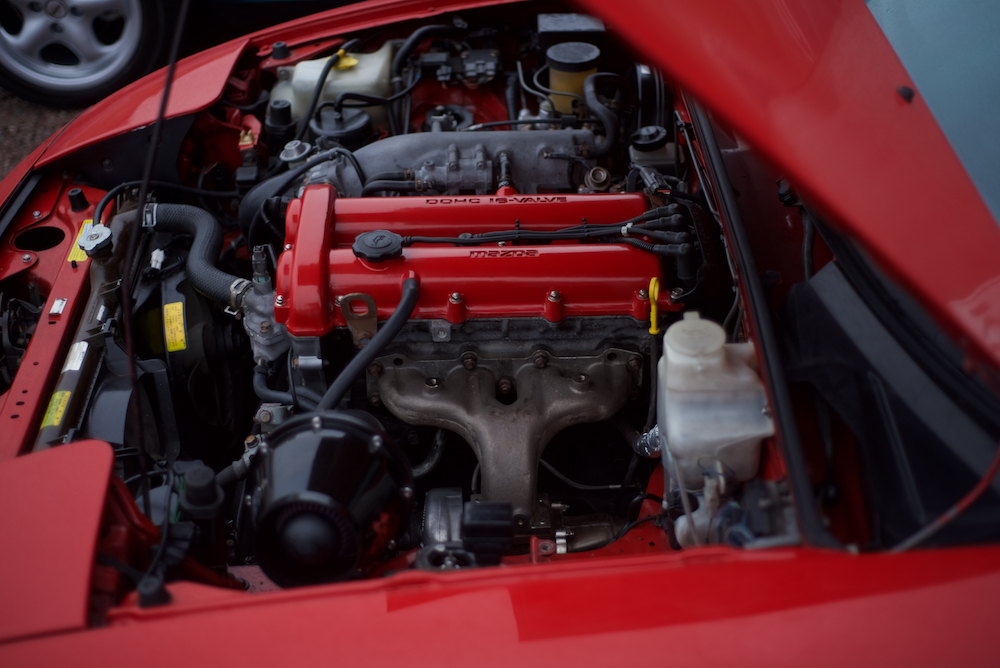 It makes sense, and Neil is quick to point out that a BBR kit is a very different proposition to a backyard turbo bolt-on. Thousands of development hours have gone in to ensuring that these cars retain their drivability, and don’t become peaky boost-monsters that ruin the whole concept of jinba itai. 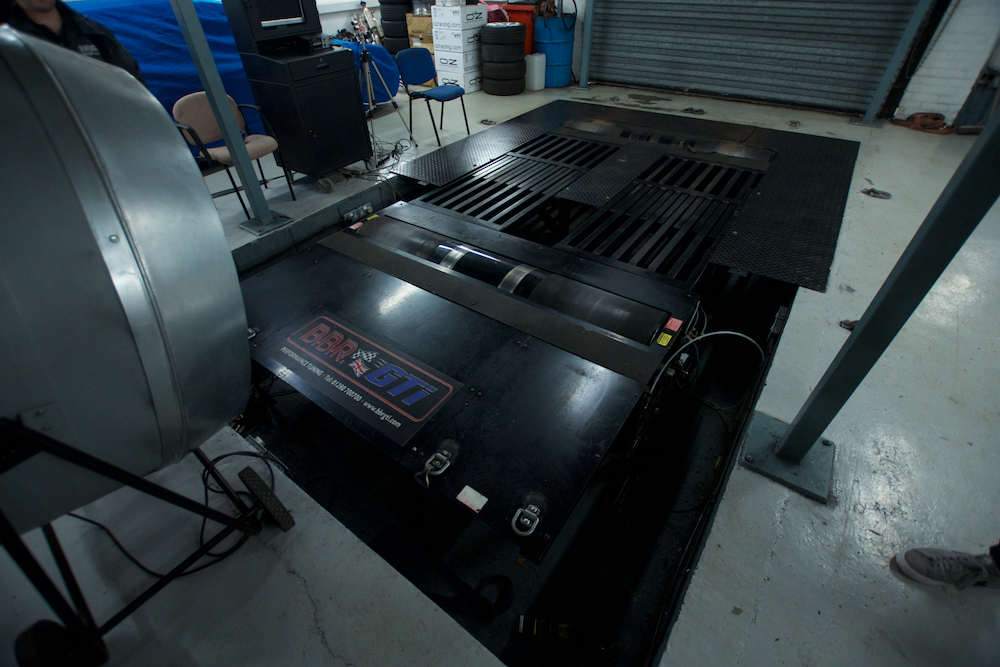 It only takes one look at the in-house dyno to see just how seriously BBR take the development of their cars and the commitment that they have. The story of how they came to develop their Mk4 kit so quickly is indicative of this. 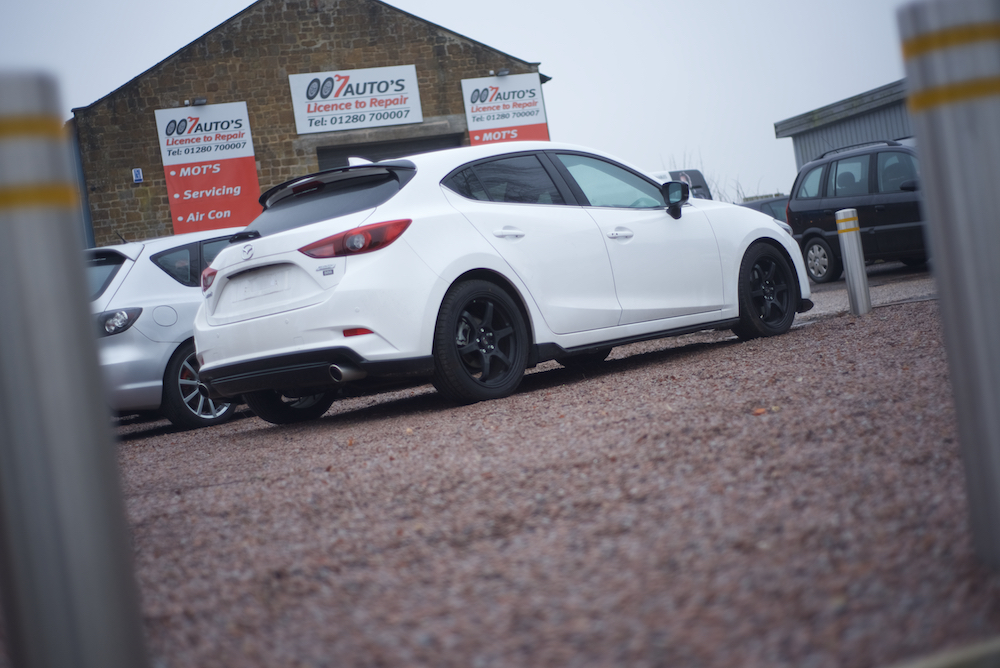 Back in 2014, before final details of the Mk4 had been formally announced, BBR were keen to begin development. Neil took a speculative guess that the new MX-5 would use the same 2.0 Skyactive engine as found in the Mazda 3, so he bought a new Mazda 3 and got to work. 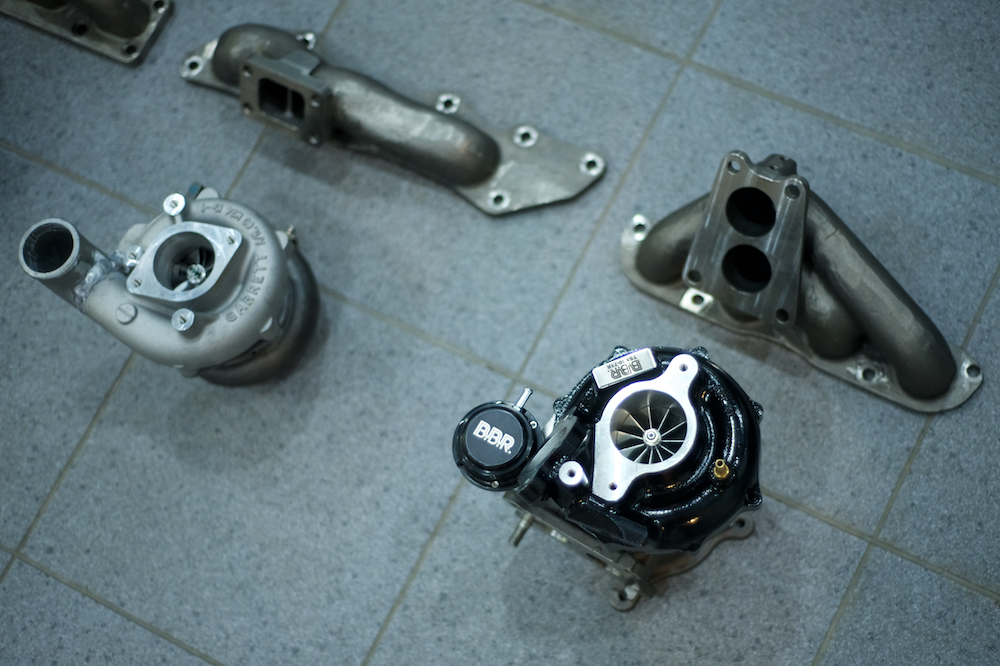 The team soon learned that the conventional style Garrett turbochargers did not work at all with the modern Skyactive motor. Instead, a high-tech solution was found in an advanced twin-scroll turbocharger with billet compressor wheel, and a carefully designed exhaust manifold which scavenges spent gasses in the same manner as the factory 4-2-1 manifold does. An intercooler and associated tubing was designed to fit in the bumper. The required piggyback ECU upgrades were developed, as was the suspension and alignment kit, which lowers the car, improves turn-in and stiffens things up. 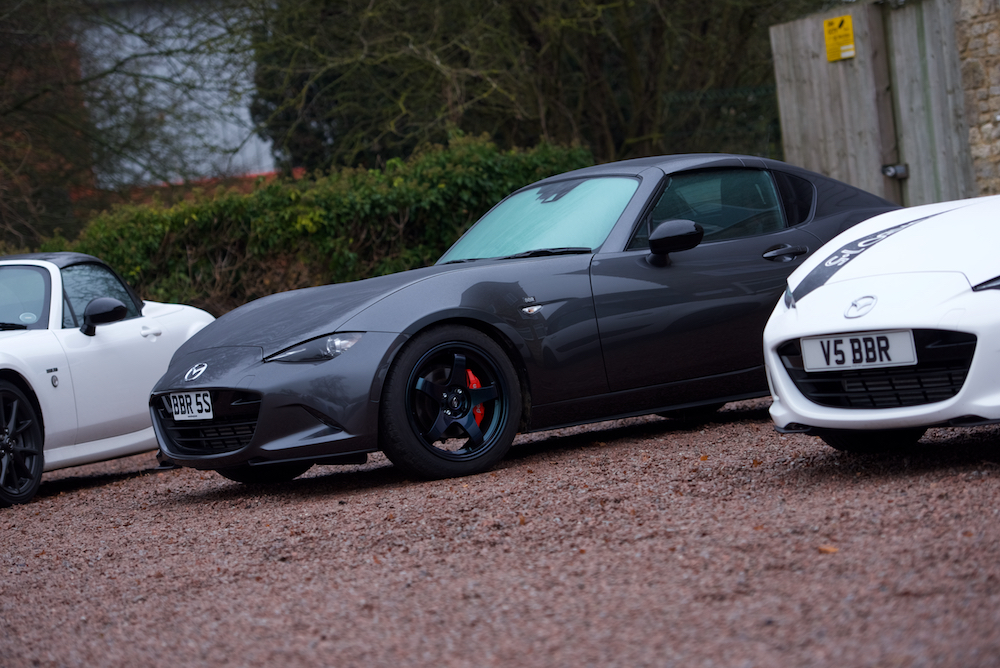 When you consider that the entire kit is fully reversible, is covered by a full warranty offered through BBR, and meets even the most stringent of Californian emissions legislation, you begin to understand the true value of this kit. Flyin’ Miata, who distribute the kit in the US, even did a track test where they invited Road & Track magazine along and ran a turbocharged Mk4 for 15 straight hours at Laguna Seca without a single issue. 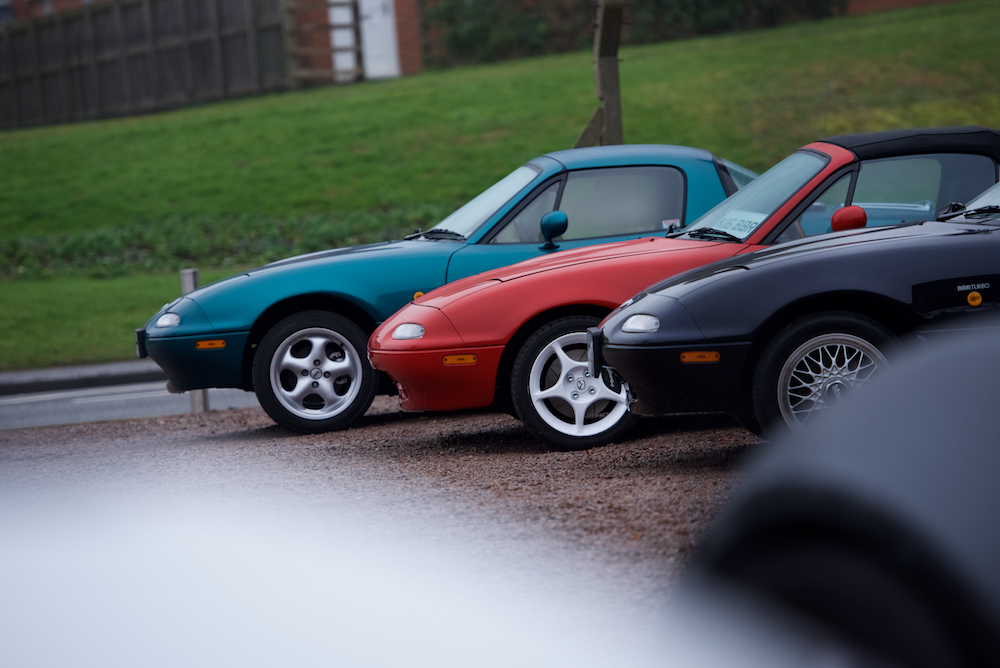 BBR’s energy has lately been spent on the newer cars, but as the Mk1 morphs into a proper classic, they are refocussing their efforts onto the older cars and taking the lessons learned to re-launch their Mk1 kit. As such, the three Mk1 demonstrators on the fleet highlight what they can offer owners of the original. They also have a fourth Mk1 undergoing a complete restoration in the workshop, too. 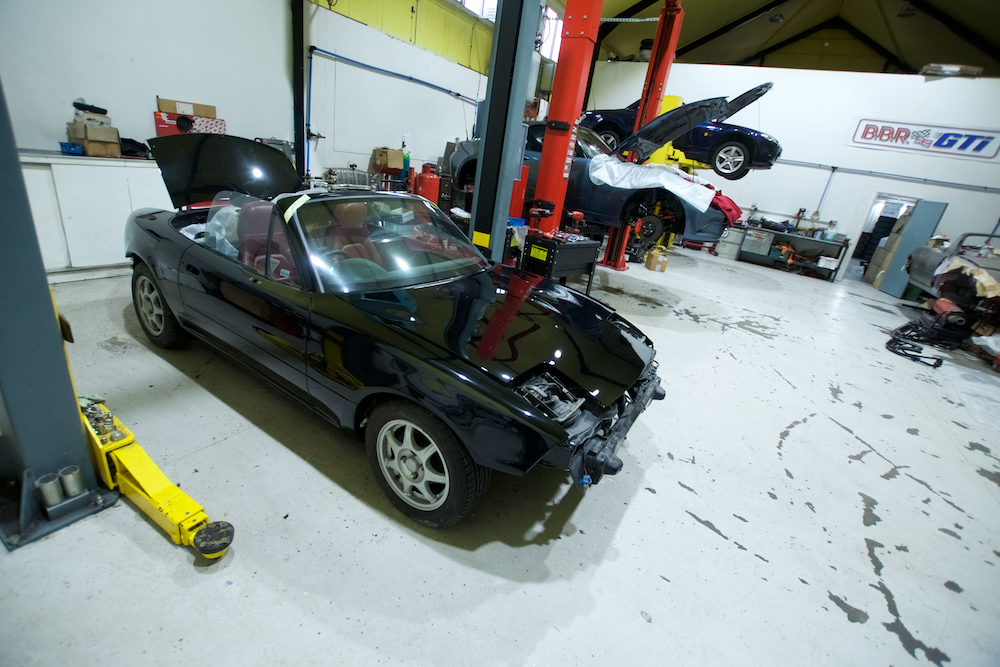 These are high-end kits, and there will be plenty of speculators out there who will argue that you can strap a turbo onto your Mk1 in your back shed yourself for a third of the cost. But those guys are missing the point – BBR offer a turnkey kit, one that you know will work and will actually enhance the car, not ruin it. And if you opt to have them fit it for you in their Brackley workshop, you just drop the car off and come back a week later. Your kit is installed, dyno tuned and road tested – all ready to be enjoyed. 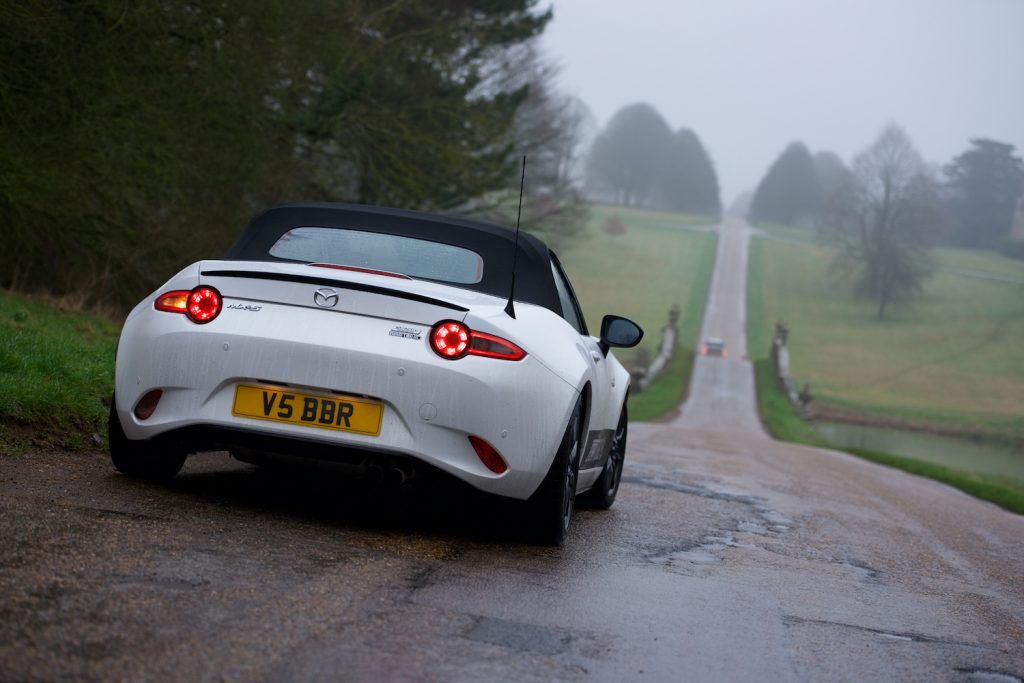 Of course, the most important question: How does a BBR MX-5 drive? Neil had the good grace to let us loose in one of his creations, on damp roads nonetheless. We’ll report on our experience in a future post.