We booked a crisp, sunny day for this autumnal walk around the old A3 at Hindhead, but the best we got was cloudy-sunshine  and a bitterly cold wind. Still, at least it was dry. However, that didn’t stop the eight cars, including Ed and Carole from the Kent region, turning up at Ockham Common car park in early November for Peter and Anna’s walk.

Those of you familiar with the A3 will know that Hindhead was a pinch-point between the M25 and the south coast, where the dual carriage-way became single-lane through the town and around the Devils Punch Bowl. But after decades of consultations the Hindhead Tunnel became a reality in May 2011 and the A3 around the Devil’s Punch Bowl, owned by the National Trust, was returned back to nature. 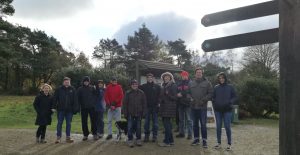 Not necessarily wrapped up well, but ready to go

The journey to Hindhead was straight forward, down the A3 and a blast through the tunnel, which highlighted those driving cars with fruity exhausts (I’m looking at you, Colin!). After convening in the already busy car park, and realising that perhaps we weren’t all wrapped up as well as we could be, we set off , London-bound, around the punch-bowl. It’s amazing how nature has taken over so freely, although it is obvious where the old road used to be. We walked for about 45 minutes before turning around and making our way back, making it just under 3 miles in total. Colin probably did walk a bit further due to Wysi getting lost and he had to go back looking for her. 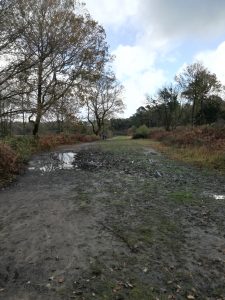 Looking down the old A3

Arriving back at the café we all had a warm drink to thaw us out before some of us set off for our Sunday lunch at the Dog & Pheasant in Brook. Ed & Carole are hardcore walkers so our gentle stroll was just a mere warm-up for them, had a bite to eat at the café before heading out again for some proper walking. We took the A3, via the tunnel, for one junction and then  proceeded down some narrow country lanes to Brook. It was a good job there wasn’t much traffic on the roads as passing places were few and far between. We struggled to all park in the village but we eventually made it into the pub. We were joined
by Colin and Sally, who couldn’t make the walk but wanted to come along for the meal. And what a nice meal it was too, with good company. Thanks go to Peter and Anna for organising this event.