From the Archive – MX-5s in Hiroshima 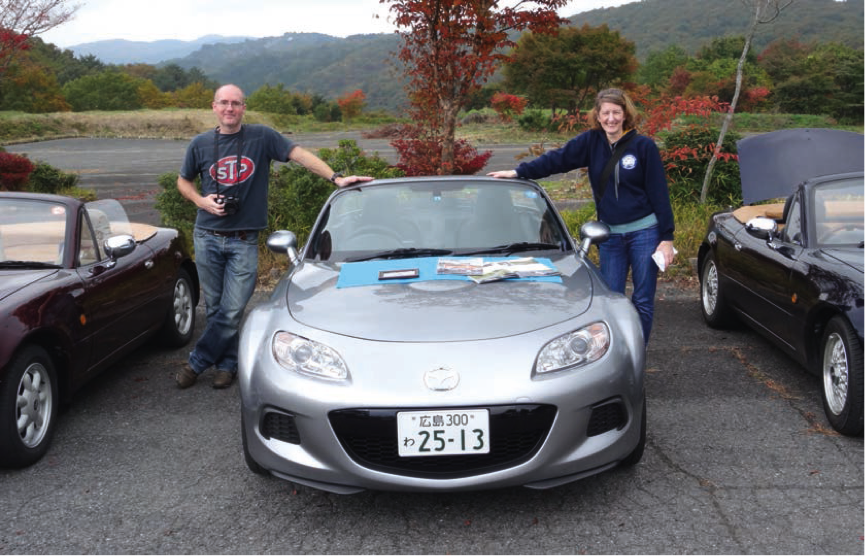 This article was first featured in Soft Top Hardtop June 2015 and can be found in the members’ area by clicking HERE. Did you know we have all issues of Soft Top Hardtop available online back to 2015? Read them HERE.

“Chris and I returned from a two week holiday to Japan in early November. We had a fantastic time – a beautiful country and polite and friendly locals who were keen to chat to us. I would strongly recommend anyone thinking of going to Japan to do it!

Back in March 2011 I was contacted out of the blue by a Japanese man (Mr Takahashi) who didn’t speak much English, but said he was coming to the UK for a few days and wanted to see some MX-5s. We met up with him and took him around Brooklands museum and I organised a mini MX-5 meet in Weybridge. Kuniaki got some passenger rides in turbo and supercharged cars and the thumbs-up suggested he was impressed.

We have stayed in contact since, via email, and Kuniaki has even joined the Club, so when we decided to go to Japan, going to Hiroshima to meet up with Kuniaki and his car club was high on my (list of) things to do. After a couple of days in Tokyo we took the Shinkansen (bullet train) to Hiroshima, where Kuniaki met us at the station and spent the afternoon taking us around Peace Park, and the Atomic Bomb Museum – a truly sobering experience. In the evening we had a fantastic multicourse meal.

The following morning at 8am we collected a hire car which we had arranged through Kuniaki – a lovely silver Mk3.5 coupe. It was an automatic, but actually proved to be quite fun in the semi-manual setting. We followed Kuniaki out of Hiroshima and into the mountains and met up with his local club – the Kurakake Roadster Club. No time for introductions though as we were already late for the main meet further into the mountains with the ‘Shooting Star Club’. That was one of the loveliest and most bizarre experiences of our (MX-5) life – we were treated like celebrities and everyone was keen to talk to us and show their cars (even if actually they couldn’t speak much English).

Among their members was Mr Wakasa, there with his lightly modified Mk3. He was a senior manager at Mazda and part of the Mk3 development team. While technically retired, he was still at Mazda as a consultant working on the Mk4. Business cards were exchanged and we were told if we visited him the next day at the factory there was a chance we might be able to see the Mk4 in the metal. 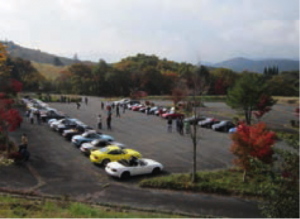 I am not sure that anyone had any form of forced induction, but most of the modding genres were covered – from classic British style, to super slammed, to big wings, to Pitcrew conversions. We were blown away to see our first Mk2 coupe! Although we went armed with keyrings and other goodies for everyone we still came away with more than what we took. We received gifts of hats, magazines, books; everyone was so generous it was quite overwhelming. Later on we headed off, back for more driving through the fantastic and lightly trafficked mountain roads. Our Mk3 quickly got under our skin – bumps that would shake our fillings out in our two 15 year old Mk2s were dispatched with a distant muffled ‘thump’ and everything felt so right. (later that night we were searching Autotrader for Mk3.5s for sale).

Anyway, where would they take us for lunch? Obviously an American-inspired farm deep in some woods that had a BBQ, a band playing, dogs running around, and sheep tethered up. After lunch we watched the locals making ‘Mochi’. Basically it’s cooked and steaming rice that is pounded in a huge wooden mortar by massive wooden mallets. They thought it would be funny to make the visitors do it so we were handed the mallets. Tough work once the rice becomes thick and sticky and they soon lost patience. The finished sticky dough is then pulled apart and rolled into small balls, and dipped in sweet sauce (it’s a dish usually eaten for new year).

Back in the cars, and another longish drive took us to the top of a mountain overlooking the Nukui Dam. There they set up a picnic and drinks for us, and presented us with various presents – sweet rice cakes, and a special tin of Mazda biscuits. Everyone was put on the spot and asked to introduce themselves to us in English and all of them managed. Thankfully when it was our turn we weren’t expected to speak in Japanese as we only knew a few words but as one of them was ‘thank you’ (Arigatou) that was used a lot. It was one of the loveliest parts of the day.

It was late afternoon now, and time to drive back to Hiroshima, but before we took the car back we would be stopping by their ‘club house’. What would that be – a pub? A hall? A shed? None of those things in the end – the clubhouse is a toyshop! It’s the club Chairman’s business (‘Saboten’), literally crammed to the rafters with toy cars and figures and costumes. A quick look around and we were presented with some toy MX5 cars. 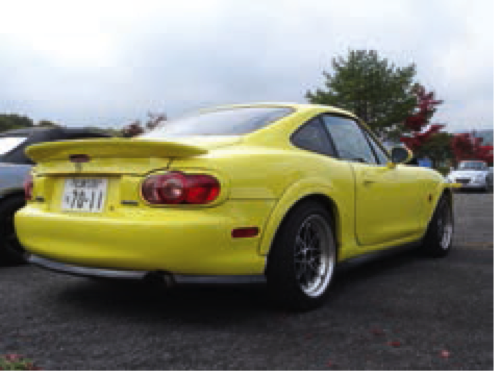 So, it was then we said goodbye to most of the Kurakake Roadster Club, and Kuniaki took us back to the rental place. After 12 wonderful hours and with a heavy heart we gave back our Mk3, but our spirits were lifted when, by chance, we found another Mk2 coupe just around the corner– this was the other shape, the red version, with the different nosecone and less ‘Halfords’ bodykit. The next day Kuniaki, with Mr Chairman, picked us up in his Suzuki wagon to visit the Mazda factory. It is amazing – it’s the size of a large town itself. It has its own power station, two fire stations, and the bridge connecting it with the other side of the river is the biggest privately owned bridge in the world. It also has its own harbour where the cars can be loaded straight onto the boat. Cars are built in 12-15 hours from start to finish. We had already registered for the (free) tour back in England so all we had to do was sign in and join the rest of the group through the museum.

We went (briefly) into the actual production line, where we saw a few MX5s going through the final stages – the dashboards being picked up by robotic arms and slotted into the cars, and then the windows being glued in place. After the public tour we called Mr Wakasa and he came down to have a coffee with us in the little café. Sadly we weren’t able to see the Mk4 (fair enough – I suppose they are busy getting it finished and don’t need us getting in the way) but we did press him for some details.

For many questions he made a ‘zipping’ motion across his lips, but did say that he’d driven the car and it was brilliant, with the throttle response in particular being excellent. He took us around some of the staff areas like their food hall and shop, and bought us a couple of MX-5 magazines, then it was time to say goodbye and let him get back to work. Afterwards we went for a lovely lunch, but here ends the main MX-5 part of our trip.

We only spent three days in Hiroshima but it was a fantastic start to the holiday, everyone made us feel so welcome and our thanks go out to Kuniaki and all our friends at Kurakake and Shooting Star Roadster Clubs. Mata ne – until we meet again.”

This article was first featured in Soft Top Hardtop June 2015 and can be found in the members’ area by clicking HERE. Did you know we have all issues of Soft Top Hardtop available online back to 2015? Read them HERE. 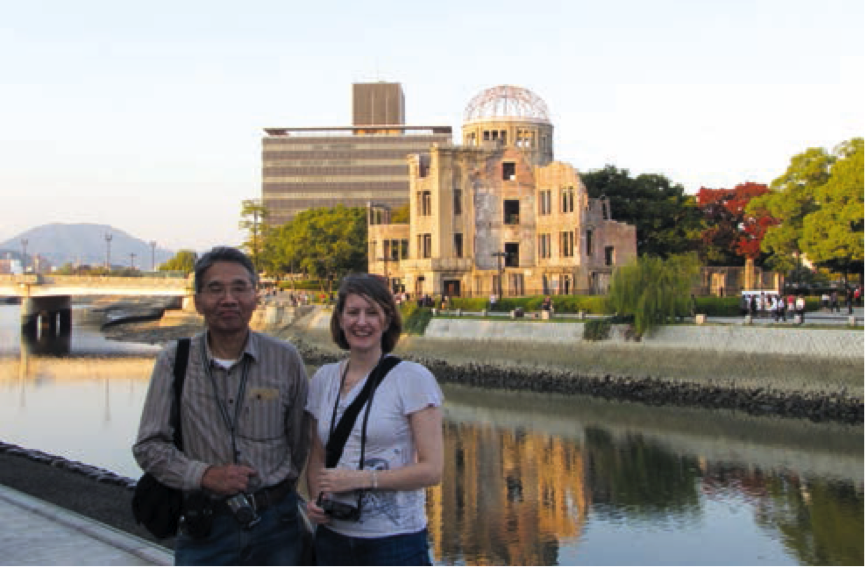