From the Archive: MX-5s and Guinness! 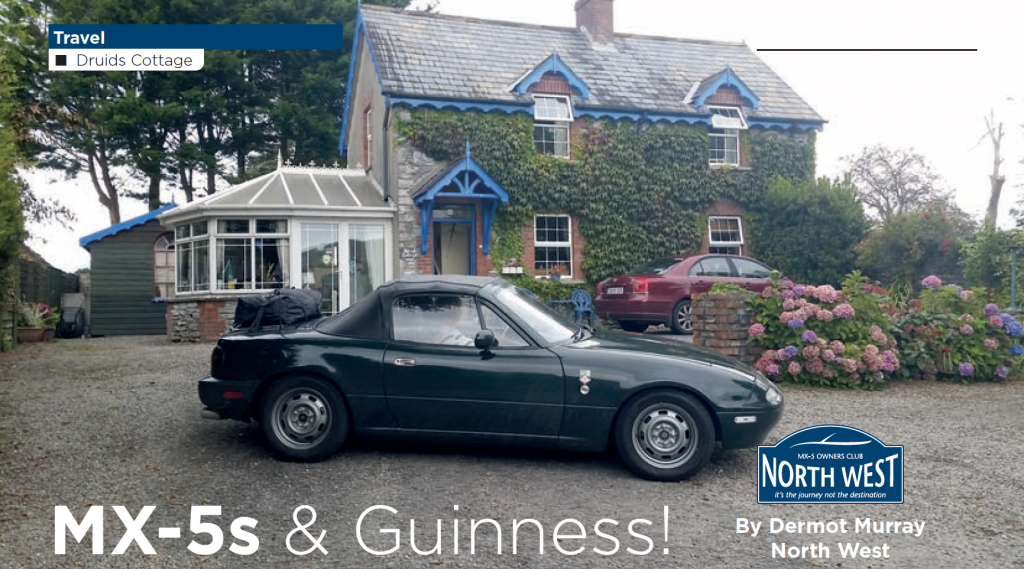 It all seemed like a good idea at the time, to take my Mk1 1.8 MX-5 on a bit of a road trip. Like all good ideas it was hatched in the pub over a few pints of Guinness. I would make sure my car was up to the trip then set off back to my country of birth, meet my family and enjoy some of the best roads Ireland and indeed Europe has to offer.

So I began to go through the car, making sure everything was up to scratch. I have confidence in my car therefore I simply gave it a full service, changed the belts including the timing belt and water pump. I was glad to see the engine looked in quite good condition once opened so the regular oil changes have clearly been working. I then set about the suspension as the car was suffering from a really annoying creaking from the struts.

This turned out to be one of the shock absorbers spring plate not being square to the strut, which in turn had caused the shock to seize. Anyway I swapped the shocks for good ones and all was well. I also refurbished a set of wishbones but decided to delay fitting them before the trip instead keeping that job until I laid the car up for the worst of the winter months.

As I was travelling with my wife Dawn I thought I may need more luggage space, so I borrowed a Boot Bag from a friend. Not having used the Boot Bag before I was a bit sceptical but I can report only good things about them – loads more storage space, dead easy to fit and held securely with no fear of damage to the paintwork – what’s not to like.

So back to the trip. I booked the ferry from Holyhead to Dublin with Stena Line using the Owners Club discount. The crossing is normally only 90 minutes on the high speed ferry but for some reason that was not available when I booked so had to use the superfast ferry which takes three hours! I set off from Manchester at 05:30 for the drive to Holyhead in North Wales for the 08:55 ferry.

We made it with time to spare including just enough time to have a relaxing coffee before boarding for the crossing. I don’t normally take the MX-5 on motorways, preferring instead to take the A and B roads but the drive to Holyhead was motorway all the way and there no issues enroute.

The crossing on the Thursday was as smooth as silk with really calm waters and the weather looked quite bright. On arrival at Dublin we were met with clear skies and a distinct lack of rain, which is quite unusual. Ireland is green for a reason after all. Although I hail from Limerick I was meeting my sisters in County Kerry as my younger sister has a place there. but that wasn’t until the Friday afternoon.

We decided to drive from Dublin to Kenmare on the Ring of Kerry where we would stay overnight in a B&B then have a bit of a drive before meeting the family. The run down from Dublin was part motorway, part dual carriageway, part single carriageway roads. As we were in no big rush the run down took almost five hours and I’m glad to say the majority was completed with roof down. Although at one point the skies were really black and menacing and yes we did manage to find the tail end of those black skies and the downpour, but a quick pit stop had the top up with only a minimal soaking.

We then arrived in Kenmare and booked into the Druid Cottage B&B for the night. Druid Cottage is on the outskirts of Kenmare town and a three minute walk had us in the town centre. Kenmare is a beautiful little town located within the Killarney National Park and sitting on the Ring of Kerry and close to the Wild Atlantic Way Coastal Route. The Wild Atlantic Way is as the name suggests an assigned route from the North to the South of Ireland, mostly coastal, but taking in all the best scenery Ireland has to offer.

We took a stroll around Kenmare and found Foleys Bar and restaurant having been told to try the food there. We were not disappointed and after dinner a few pints of Guinness were sampled, along with some traditional Irish music to round the evening off. We were back in the B&B before midnight and slept soundly waking to a beautiful breakfast of scrambled eggs and smoked Salmon with some soda bread on the side.

The weather was again dry but there was a mist over the hills and it was a little chilly, but still as it was initially dry the top came down. We decided not to travel the entire Ring Of Kerry as it can take a couple of days to complete properly, so we completed an abridged route taking in Molls Gap from Kenmare over to Killarney.

Moll’s Gap is named after Moll Kissane, who ran an illegal brewhouse, or sibin (She-Been) while the Killarney-Kenmare road was under construction in the 1820’s. The road itself is only ten miles long but the scenery and indeed the road itself are worth the journey.

We arrived in Killarney and as seems to be usual with any town in Ireland there seems to be bottlenecks and therefore heavy traffic. I then decided to follow the road onto the Dingle Peninsula and make our way towards Inch Beach. You are allowed to drive on Inch Beach which stretches for a good couple of miles but I decided to give the beach drive a miss and go for a walk along the beach instead. 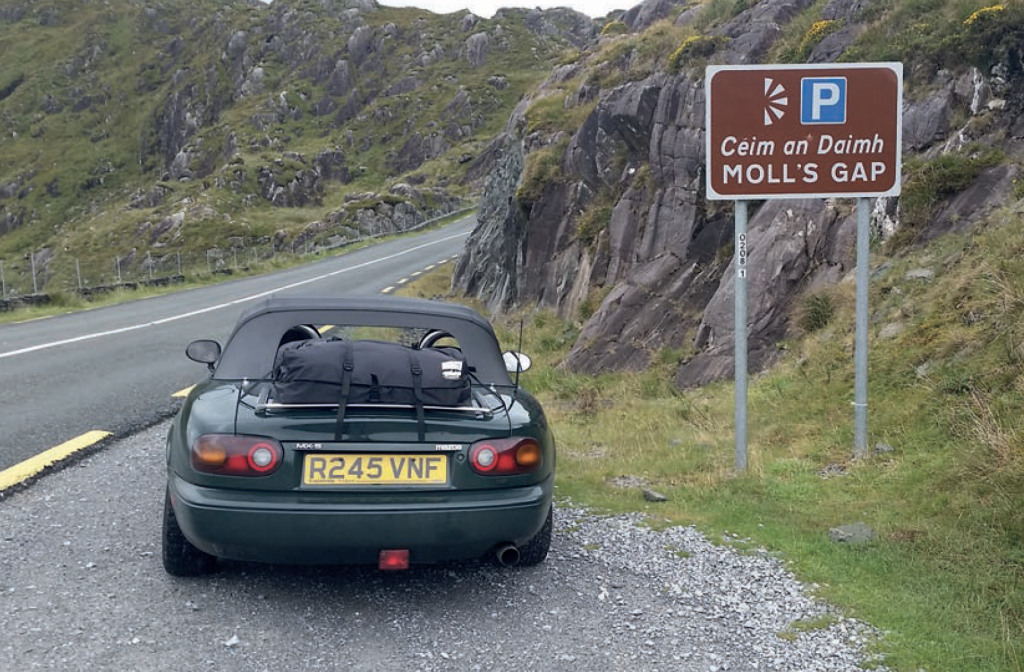 The top was again down for the drive along the peninsula and although we saw a few spots of rain we endured it and came out the other side quite dry and arrived in the fishing village of Dingle to lovely sunshine. Here we met up with the family and had a stroll around the town which is famous for ‘FUNGI’ the Dolphin who has lived in the bay for years and interacts with tourists on a regular basis.

We arrived at my sister’s place located on a small caravan site right on the beach at Castlegregory. Nine of us managed to make ourselves comfortable in her static caravan and with the Rugby World Cup taking place we headed for the local bar to watch the England v Fiji game with England taking the honours.

To be honest we didn’t take the MX-5 out much for the next couple of days, instead we used the bigger vehicles my family had with them, so the little MX-5 sat in the car park resting. All too soon it was time to head for home and once loaded up we headed for Dublin where we opted for the more direct route on the way to home town of Limerick following the N7 for most of the way. The journey to Dublin was in torrential rain for the majority of the route which made for heavy going, although once in Dublin the sun shone.

On arrival at the Port we met with a Lagonda and Bentley speed 6 who were both on a tour of Ireland and were displaying 20th Annual Rally 2015 plaques. I didn’t find which club they were affiliated to but both vehicles were Irish registered.

We boarded the ferry but there was a delay whilst the bow doors were secured and we set sail back to Holyhead. The crossing was fine, if a little bumpy in places, and we arrived in Holyhead around an hour late due to the bow door problem. We then had a run up through north Wales in the wet and dark, which wasn’t ideal but the MX-5 coped with it all.

In total we covered over 822 miles in four days, not a massive amount but still enough to test a vehicle. I’m happy to say my MX-5 never missed a beat. I’m now planning on driving the complete Wild Atlantic Way from North to South maybe next year but taking our time and hopefully enjoying a bit of sun as well. 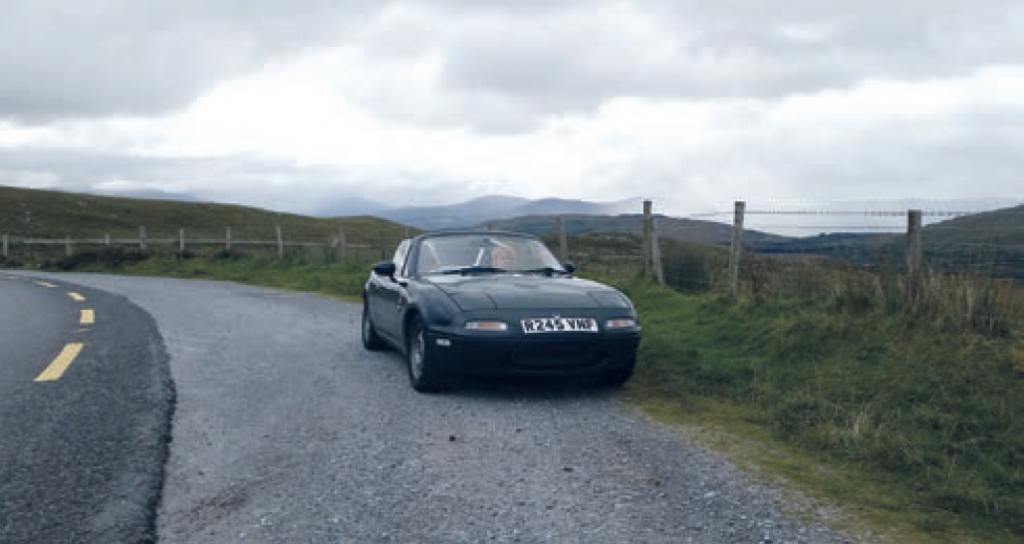