‘Nothing sets an MX-5 owner on edge like the prospect of rust and lots of it, and it turns out that our NB is riddled with it!’ 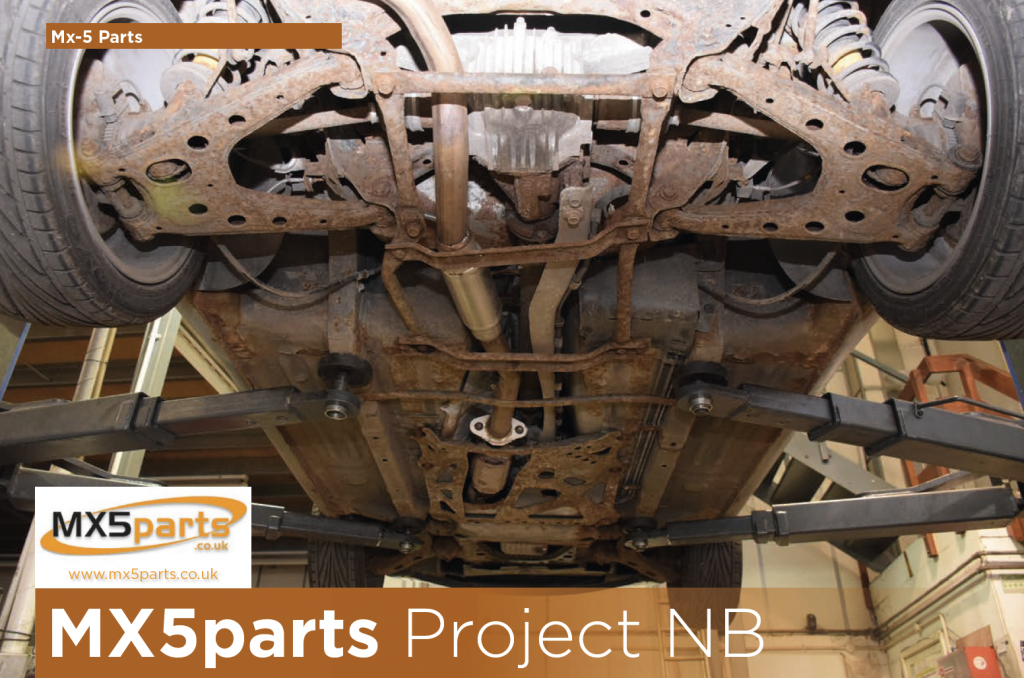 Ferris Bueller may have had a day off, but sadly for us car enthusiasts, his namesake, Ferrous Oxide, never does. The dreaded tinworm – or rust, as it’s more commonly known – never sleeps, and in the case of the MX5parts car, it has really taken hold over the last few months.

Regular readers will remember that the last issue saw our NB treated to a wipe-down using Autoglym products, before being cocooned in a Stormforce car cover. This was a good move of course, but we fear it may have been too little, too late. A quick squint at the car’s arches under decent light reveals that this problem really has reached a zenith now – and needs to be rapidly addressed before it spreads throughout the car. Small, almost insignificant blemishes have mutated into full-blown bubbles, blisters and cauliflowers. It’s an unsightly mess that ruins the car’s looks, and it’s only going to get worse.

The front wings aren’t a problem. After all, they’re just simple bolt-on items that should be the work of no more than a few minutes to swap. The rears however are going to be a bit trickier.

Seeing as the rust is bubbling all the way around, the only way we can really solve the issue once and for all is with a new rear-quarter panel, one for each side. Of course we’re fortunate in that we’re MX5parts, the UK’s largest MX-5 specialist and we therefore have access to a massive range of body panels for MX5s of all ages, so we took the plunge and went all out and ordered the panels in question. We like to think that we’re investing in the future, particularly as our car is a low mileage, the rare Sport VT.

Mk2s are by no means classics yet, but if you keep any car long enough, you always get your money back! Besides, with so many of this era of MX-5s being literally eaten alive by rust, give it ten years – and these six-speed, LSD equipped go-karts will be pretty rare… So, who knows? Maybe this one, in its rust free state, might be quite the catch!

So, just how bad was the aforementioned rot when the time came to remove the original bodywork for a close inspection? So, so bad! It turns out that actually, you don’t know rust at all until you’ve owned an old UK MX-5! And this one has done a proven 60k miles only, don’t forget.

The MX-5 has always been one of those cars lauded by critics as being able to buck the trend of increasing automotive obesity by shedding pounds with each successive model year and generation. We always wondered how on earth they managed to do that in a world where cars add kit and complexity each year and gain massive amounts of err… mass with each new release. It turns out that the way the little Roadster has kept trim all these years is apparently a total absence of ANY type of anti-corrosion treatment and an almost comical lack of any kind of panel sealers in most places. Awesome for those early car-mag reviews in the valuable few months after launch, but bad news when you fast forward down the years and have to put one back together! 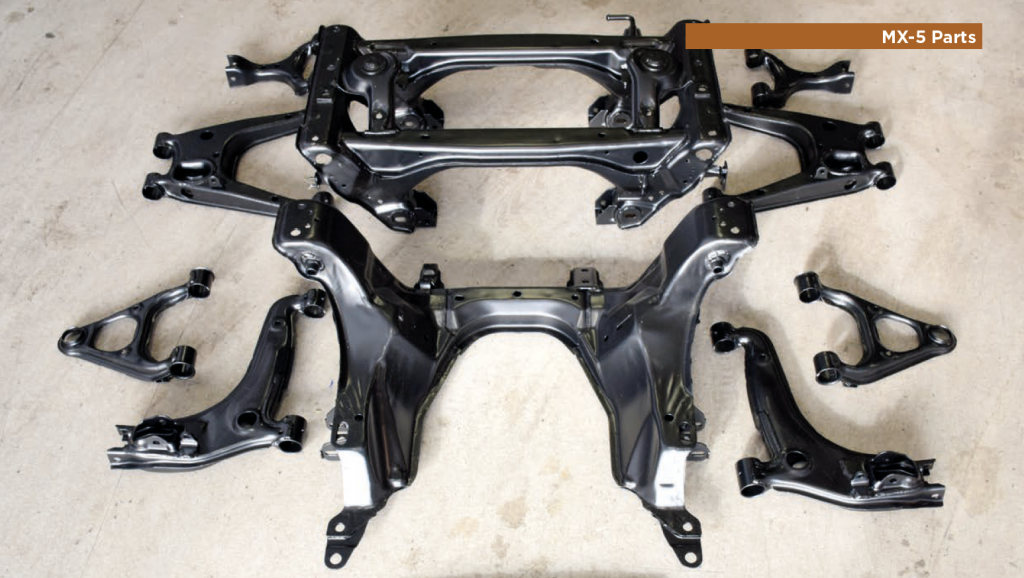 We were able to locate a full set of NB 2.5 model subframes and suspension arms some months ago, and these were sent off to be fully stripped of their similarly terrible corrosion, before having them powder coated in a rather smart – and very

‘factory’ looking satin black finish. These had come back a few weeks ago, so went over to our friends at LandSpeed in Nottingham for fitment, the work to be undertaken by Adam, one of the outfit’s best qualified techs. The initial plan was that Adam would strip all the old units off, fit the new ones, and then we’d do a deal on LandSpeed keeping the old parts to repeat the process of having ‘new’, powder coated parts sitting on the shelf ready to do an exchange for the next poor unlucky soul that owned a rusty MX-5. In theory, at least, this makes this entire chassis change do-able in a relatively short space of time, rather than having to have a car sat ‘dead’ on a ramp while everything gets taken off and refurbished.

Of course, if doesn’t make much sense to get these perfectly restored parts and put manky old bushes in, does it? To us, it doesn’t even make sense to put new OEM items in, either. The obvious upgrade was a set of SuperPro bushes all round, a brand we at MX5parts made full use of in the past as we’ve found them to always make a significant difference to the precision of the drive, without ever ruining the ride quality, or inducing any harshness into the vehicle concerned.

How SuperPro do this is pretty clever. Many bush manufacturers need to produce two kit hardnesses. One for their road car customers, and one for their race and track clientele. One works perfectly for each one, but realistically won’t suit the other. SuperPro sees it a little differently. By moulding a fiendishly clever formula of polyurethane that effectively has a ‘progressive’ property, they end up with a bush that’s happy to be reasonably compliant at low, road speeds, but has more than enough minerals for when the going gets tough on race day. Don’t believe us? Take a look in the paddocks of many Drift, Time Attack and One-make series and see how many ‘proper’ race cars are running these little blue bushes as the optimum race solution. Yet, you’ll find the very same product used by many road car tuners, too. All very clever, really.

We don’t have any motorsport plans for this particular MX-5, but the odd track day or three is definitely on the cards once it’s all back together, so for Adam to go through the whole chassis and upgrade like this feels like really sensible future-proofing.

Once the kit’s all fitted up, we’ll rip the entire drivetrain and subframes out, clean up the floor – and put it all back together again. Adam and the rest of the LandSpeed team are even talking about sticking the thing on a spit to be able to get right around it, which sounds a tad drastic considering the car only went in for some new wings and suspension!

While we were in the LandSpeed workshop, we decided to take a front wing off and see what was lurking underneath, to confirm once and for all whether it was as rotten as we feared. The OE wings will be skipped anyway (our own, brand new panels will take their place), meaning Adam soon had the bumper undone and wing off to let us see the state of play – and guess what? There’s rust in the inner wings, too! We’re beginning to think that the windscreen surround is going to about the only original part of this car by the time we’ve finished!

Anyway, full marks all round to some top companies and people for their skills and assistance. Join us back here next month, where we plan to fit the newly arrived front wings and rear three quarters, and almost certainly watching Adam undertake a MASSIVE amount of welding! 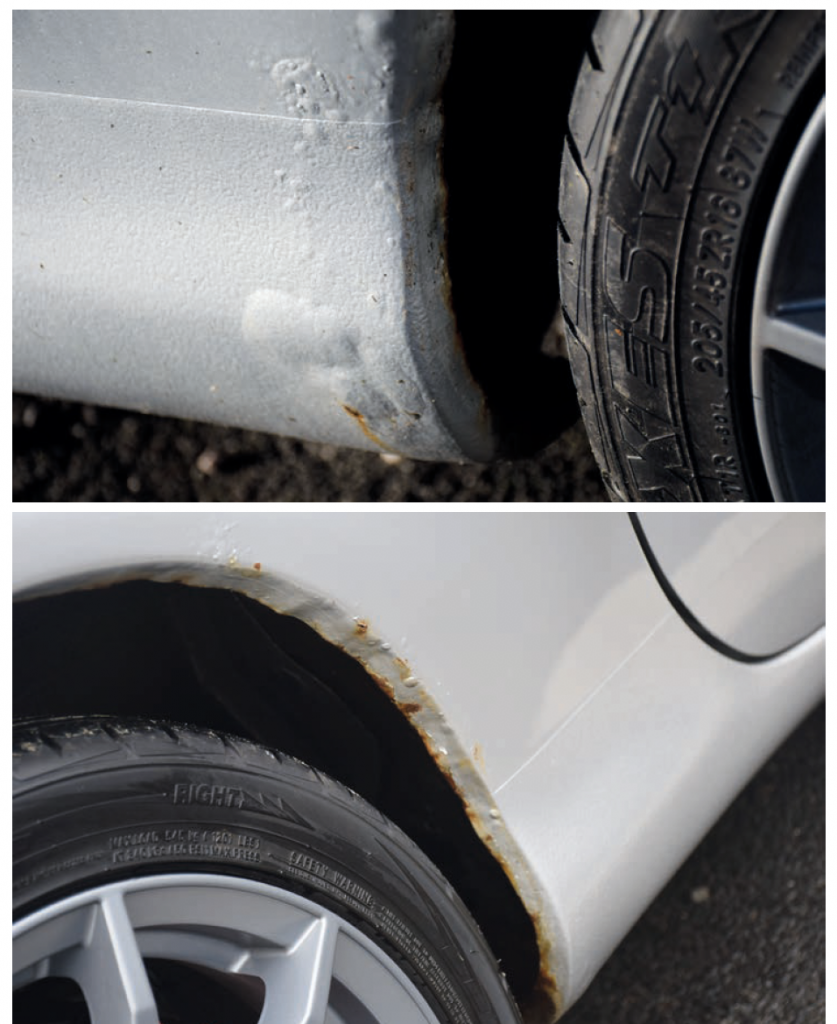