Daytime running lights? On a MK1?!

This article was written by Norman Hughes from the Milton Keynes & Chilterns area and was first featured five years ago in the October 2013 edition of Soft Top Hardtop, which if you’re a member you can read HERE. If you’re not a member then please join the club for more great technical help.

I must be getting old as I find myself increasingly irritated by the new breed of daytime running lights (DRLs) that are now compulsory on all new vehicles. There appears to be a covert competition between manufacturers to see who can produce the brightest and best installation of LED technology. I may be cynical, but I do find some new vehicles looking like mobile Christmas trees (Mercedes Benz and Citroen seem especially dazzling!)

After this rant you might consider me totally “anti” this feature but a few journeys in the murky mornings and evenings earlier this year made me think again. Whilst the dim-dip feature of the Mark 1 MX-5 is fine on poor visibility days, it does seem a shame to drive around all the time with the headlamps up. This started me thinking and the search for a possible solution that did not look like an afterthought. There are hundreds of variants of aftermarket LED running lights available but none that would look integrated to the smooth front end of the MX-5.

I decided to look at the possibility of modifying the front parking/turn signal unit to accept some miniature LEDs. Not wanting to ruin my existing units I took the sensible (I hope) option of sourcing a couple of replacement units – one from eBay and one from a breaker. The latter was a bit battered and cracked but that didn’t matter as it was to be my “proof of concept” for testing purposes! What about the LEDs? A rummage in my local Maplin store revealed the perfect solution. A pack of 4 miniature white LEDs that would (I hope) fit around the parking lamp holder socket in the light unit.

With some trepidation I attacked the plastic light units with my trusty Black and Decker. As I had hoped there is just enough room to drill four small holes (from memory around 6mm) around the parking light position. The Maplin miniature

LEDs come with small plastic mounts which clip into the holes then the LEDs are a push fit. In a perfect world where you have tiny fingers, these mounts would be pushed through from the inside of the light unit to the outside. This is possible but I opted for the simple solution of clipping them in from the outside which seems to work just as well. With all four in place and the wiring tidied up a little, I applied a thin coat of clear silicone rubber sealant to maintain a degree of waterproofing for the light unit.

Then came the first test – connect up to a spare battery on the workbench and walk to the end of the driveway to test the visibility. Looks good! So with the concept tested and pronounced satisfactory, it was on to modify the two original light units from the car. 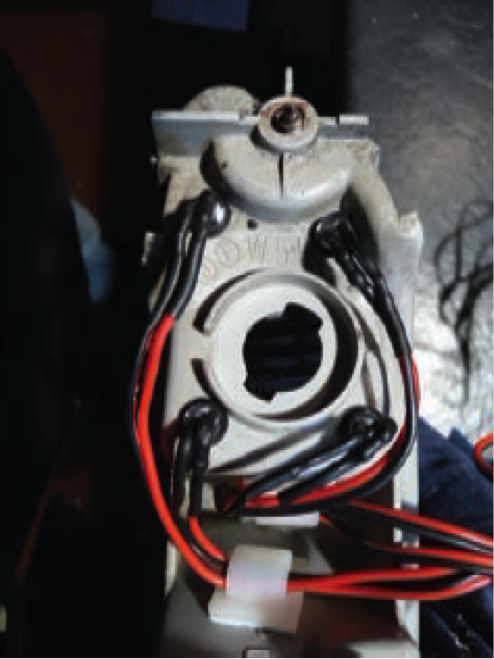 Now onto the wiring. I had located a spare ignition controlled supply under the bonnet, but of course, this was not a sufficient solution as I required these lights to extinguish when the side or headlights were on at night (after all they are daytime running lights!). The solution was the simple addition of a changeover relay which would break the ignition controlled +12v supply to the LEDs when the lights were switched on. These relays are easily sourced from Amazon (or your local car parts shop) for just a very few pounds and there is space for fitting alongside the existing relays under the plastic cover on the LHS of the engine compartment. Have a look on Amazon.

All was now set for refitting to the car and testing. Thankfully everything worked as it should and I’m pleased with the result. As an inexpensive aftermarket fitting these are not as dazzling bright as many OEM fittings and as such not highly visible on a bright sunny day. However, this was not the purpose of the modification as I was looking for a solution to increase my visibility on those dark and murky days (we usually have a lot of them) when you are wavering about turning on the headlights. Under these circumstances, they work just fine. (If anyone is interested in doing something similar I can provide a hand-drawn wiring diagram of how this is connected).

Again, if you’re a member you can access the last five years worth of Soft Top Hardtop online for free HERE.