Day 1
After breakfast at the Lancaster Premier Inn on the Monday morning several cars took to the Morecambe Bay seafront to admire the bronze statue of Eric Morecambe, erected in 1999, and even on this overcast day everyone agreed it made them smile and was a great way to start the day. There are quips set in the pavement all around the statue, so it brought sunshine to our day. The statue is near the stone jetty which makes an excellent viewpoint across the bay. There are also wild bird sculptures.
The time had come and all 9 cars met at the port of Heysham for a check in on the IOM Steam Packet ferry which departed slightly late at 2.30 pm. The crossing proved to be fairly calm and we all found various places to rest up, and have a bite to eat. The crossing was slightly longer due to a slightly delayed start, so we docked at about 6pm and drove the 5 minutes along Douglas promenade to the Palace Hotel & Casino, well placed on the Douglas sea front for our visit to the island.
We all checked in to mostly modern rooms overlooking the seafront and we all sat down to a delicious evening meal in the hotel restaurant.

Day 2
After a discussion with the group at breakfast, the majority of us decided we should try the Island’s other diverse means of travel before being let loose on the islands roads! The tram stop was just outside of the hotel but the driver of the first horse drawn tram failed to stop, no doubt deciding that he didn’t want another large party on his already well laden tram, so we hot footed it to the Electric Tram Station at the terminus at Derby Castle, Douglas. There followed a hectic day of mixed modes of transport. Electric tram to Laxey, but no time to see the wheel at this stage, then another electric tram, see photographs, to the 600 metre summit of Snaefel. A quick coffee and cake on the mountain top with amazing views across the island and back on the tram to Laxey, then joining the other main line up to Ramsey.
It soon became apparent that our plan to travel back to Douglas on the tram and catch the steam train to Port Erin and back would fall apart due to lack of time but a very, friendly and helpful lady, a native of the island, came to our rescue “Why not travel back to Douglas by bus which would give about ten minutes to catch the last train and then another bus back to Douglas and if you are running late phone the station and they will hold the train!”
Armed with the kind lady’s own timetable we decided to give it a go.
Time for a quick coffee and sandwich or walk on the beach at Ramsey, bus to Douglas, a call to the station from the bus when, true enough, they held the train and we ran up the platform and made it just as the controller waved his flag and blew his whistle. The carriages were old style and windows were held up with the traditional leather strap which was delightful to see. It was such an adventure and we giggled like children on a school outing. Our return trip back to Douglas was by bus, which gave us some great views of the coast, airport and countryside.
To cap an eventful day Barry Prior, one of our group whilst on the bus in Castletown saw an old friend from Henley who had moved to the island. Much window banging caught his attention and totally surprised they met later in Douglas for a meal at a Thai restaurant.

Day 3
The train trip had given us all an insight into exploring the island and so it was in our MX5’s that we headed for our third day out. We started on a short drive south to Castletown, to explore Castle Rushen in the centre of the town and then to the shops and quaint streets of Castletown, a throwback to yesteryear, all again in glorious sunshine.
Then we drove down to The Sound which looks out on the small
island of the Calf of Man, off the south west tip of the main island, which must be one of the most scenic spots on the island. We had lunch at the cafe there, and tried to get parking spaces to photograph all the cars together, it being a splendid location, but failed. We then walked out onto the headland overlooking The Sound where we met volunteers of the Manx Whale & Dolphin watch and they encouraged us to watch birds and seals on the rocks, it was truly a moment that happens rarely in life. After this we drove on to Port Erin to walk the beach, paddle and eat ice cream at the cosy nook beach cafe. A splendid end to a beautiful day.

Day 4
This was to be a most exciting day as we all drove the TT Circuit which took one and a half hours on a beautiful sunny day. Just as an aside the motorcyclists who race on the IOM TT course over 2 weeks every year race at an average of 130mph, with maximum speeds approaching 200mph on town, village and mountain roads! Awesome and they complete the course in minutes!
We then headed to Peel which is without doubt a lovely town on the west coast. We parked at Fenella Bay which looks out over a wonderful scallop shell covered beach and with views over the ruined Peel castle. After a coffee and snack at the breakwater cafe, we had a wander into the small “back in time” town of Peel where parts of the shopping area are still back in the sixties. However it is well served with several pubs, cafes, museums and a fish smoker to keep everyone interested and for children it is an ideal bucket and spade resort. A number decided to sample the local “Queenies” young scallops flash fried in butter- an excellent decision. Some then drove on to Niarbyl point, with views out to the bay, a sun beginning to set and a whitewashed cottage that would have many a tale to tell. It felt magical and it was a job to pull oneself away. But we did to return to another great evening meal and good company.
Day 5
This was a trip back to Laxey to climb the large red restored mining wheel and view the remains of this ancient mining village which was fascinating and then onto The Point of Ayre the most northerly point of the IOM to view the lighthouse and rather stark headland. We almost got blown across to Ramsey bay but lunch called us and we came upon a café.
We also surprisingly met Steve, the IOM coordinator for the island MX-5 club and arranged with him to visit the Isle of Man Motor museum on the Sunday for a guided tour and photo shoot. Our final stop off on this day was Laxey beach where we met some local fishermen netting the small beach for sand eels and they explained that this was their bait for winter fishing. It was a lovely end to the day.

Day 6
The only day of our tour of the island where the weather turned wet and windy so several of us went our separate ways, to the Douglas shops, Douglas museum etc. Later a group of us then had an early pizza/pasta at a lovely Italian restaurant on the promenade prior to our visit to the Gaiety theatre also along the promenade. This was to see Mark Kermode (who was born in Peel on the IOM) introduce an evening of music and film and talk about his early music career. This was part of the IOM 2018 Film Festival. It was a very enjoyable show and not something we had previously planned. Then back to the hotel for a night cap before bed.

Day 7
Two of our group Alf & Barry organised a run up to the splendid IOM Motor museum at Jurby. This was nearly thwarted by a road closure due to a cycle race, but the detour took in much of the moorland landscape and alongside a few of the glens and streams. We got lost a little but all turned up not too late to meet Steve and his wife who lined all the MX-5’s up, including her own red Mk 1, outside for a photo shoot. We had coffee and spent several hours touring the wonderful collection of over 500 vehicles, the core of the museum is the Cunningham Collection of mainly American cars, but also includes a green goddess fire engine from Buckinghamshire and a Peel electric car, built for one person, and which had a large handle at the back to turn it around as it had no reverse gear! This really was a great way to finish off this action packed holiday.

We all had such a good time on the Isle of Man, very car friendly and most welcoming with such a good mix of mountain and rural roads, that we would recommend it to others thinking of doing the same.
Finally the IOM group would like to thank our esteemed leaders Margaret and Pete, ably assisted by their assistants Barry, Alf and Pat, and Simon for making this an unforgettable experience and a great holiday! 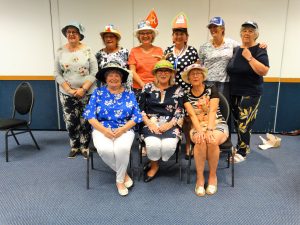 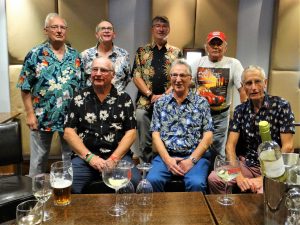 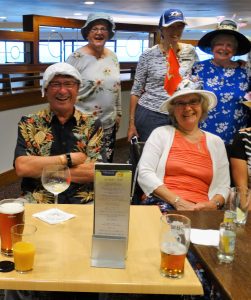 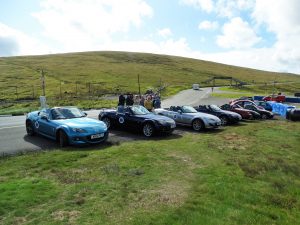 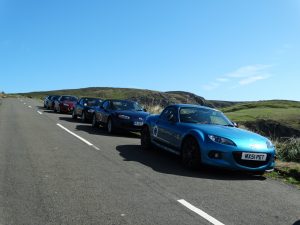 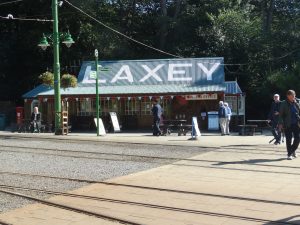 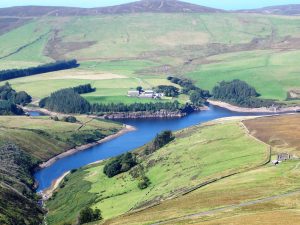 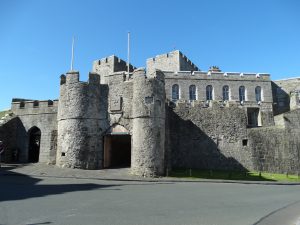 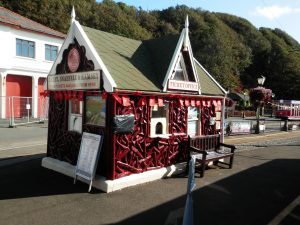 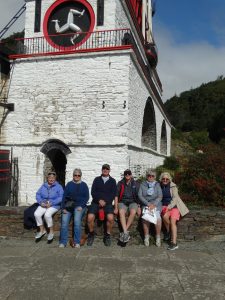 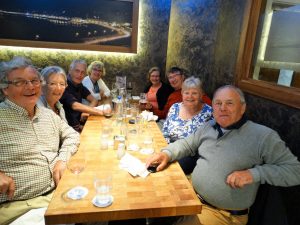 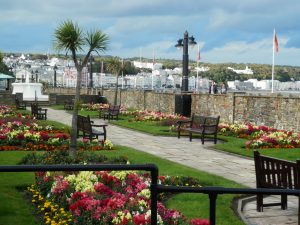 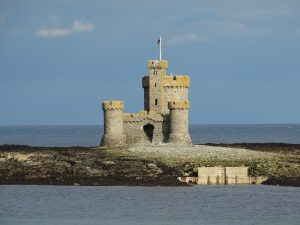 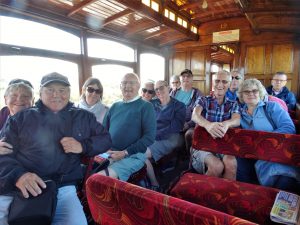 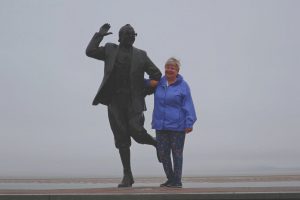 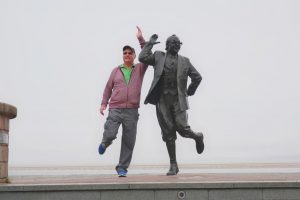 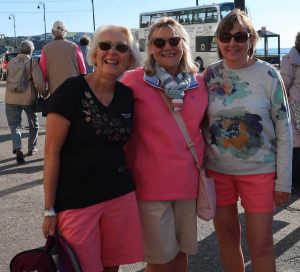 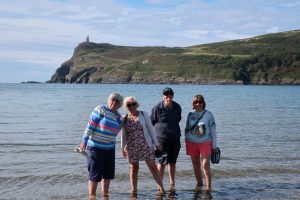 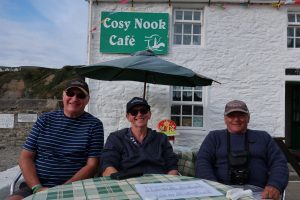 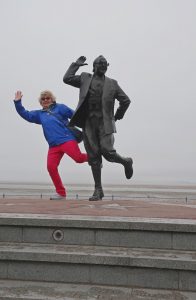 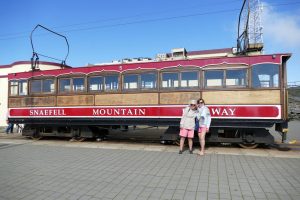 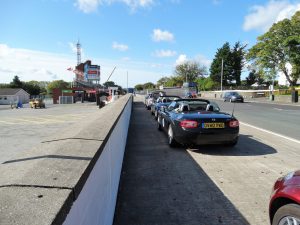 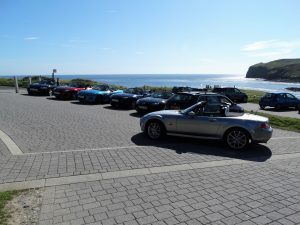 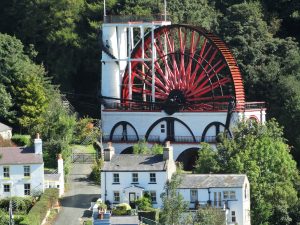