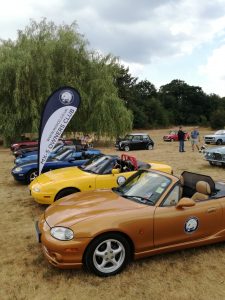 It was take-two for the Ripley Event, where we went from one extreme last year (heavy downpours with thunder and lightening) to another this year (scorching sunshine).

The event at Ripley is a small village affair with a good selection of vintage cars and agricultural vehicles, along with some newer cars, much like our own selection of MX5s that turned up for the afternoon. At least we were leaning towards the classic end of the spectrum with three mk1s, two mk2s and just the one mk3.

And like an action replay from last year we parked up in the same spot, with the Weeping Willow tree at the end providing vital shade as we sat around and whiled away the afternoon chatting.

The main show area consisted of two arenas, one for the dog show and the other showing acrobatic displays and dancing, with lots of stalls and food tents around the edges, including the all important ice cream van.

Before the show officially got underway we were treated with a fly-by by the Red Arrows who, we assume, were on their way over to Farnborough air show.  Despite being a small show we had a few people interested in our cars and we spent some time chatting to them. 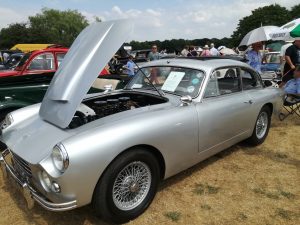 There were some interesting vehicles on display, including the AC Greyhound (left), which has been owned by its current owner for about 40 years.