Although this event started off being a West London ‘do’ it quickly gained traction in the Solent and Sussex Downs areas with many of those members joining us in car park next to Goodwood Racecourse, just a stone’s throw away from the Weald & Downland Museum.

Since Ockham Common car park has now introduced fees, you only get 20 minutes of free parking (you must get a ticket though, just in case you end up there), which meant a quick turn around for our 9:45am departure.

Colin took us down to West Sussex via our usual ‘Goodwood route’, although we took the first left in Singleton to Charlton, and then a right turn to bring us out at the ‘Triangle’ car park at Goodwood Racecourse.

We collected our friends from the southern areas and made our way down the hill to the Weald & Downland. Colin had spoken to museum who said we could park within the steam rally and other car club show areas.The group parked up and we had an impressive display of 13 cars with all marks represented, with the exception of the RF. 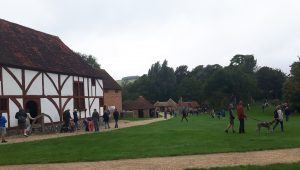 After a bit of a chin-wag we went off in groups to go and investigate the other displays and the museum itself, which is a collection of old buildings from the surrounding areas moved, brick-by- brick, and rebuilt in the grounds of the museum. The museum opened to the public back in 1970 after a small group of enthusiasts wanted to preserve the vernacular buildings of the south-east. The weekend we visited the museum was hosting a steam weekend with lots of traction engines and a fun fair, which provided added attractions.

We re-grouped at lunchtime back at the cars and had our picnic, cumulating with birthday cake for members who were celebrating their birthdays at the time.  Whilst we were eating and chatting a photographer from the Chichester Observer came round and took a group photo, which can now be found online!

In John’s absence we nominated him to provide the commentary for the MX5 parade in the arena later on in the afternoon, and what a grand job he did giving a brief history of the car and then interview-ing a few members.