From the Archive: My road to owning an MX-5

This article was first featured in the October 2012 issue of Soft Top Hardtop, members can access the club’s archive going back to 2012 in the members area by clicking HERE.

Before I start I’d just like to tell you a bit about myself. I’m 33 and my occupation is a store man – not the most glamorous of jobs but it pays the bills! My interests? Well, there’s really just one – Motorsport. Call me sad but I enjoy it and I’ve met lots of people and also met my fiancée through it. I enjoy everything about it from the history through to the future and how we can make the sport safer. I also have got involved by marshalling.

When I started marshalling at 17 I got the nickname of ‘Ralf’ as they say I used to look like Ralf Schumacher. No, I didn’t get to act as a double, so I never got to race cars myself. Oh well like Murray Walker used to say, ‘Those who can do, those who can’t talk about it.’ So here’s my story, sit back and relax and here we go!

I can remember my next-door neighbour owning an MX-5 when I was in my early teens. I didn’t really dream of owning one then. I think it was because I thought that someone who owned a 2-seater open top sports car had to be well off and I didn’t think I was bright enough to get a good job to afford one, so I left it at that. My first drive in an MX-5 was on Woodbridge Airfield in 2006. I had just started marshalling for Javelin Trackdays and they were doing Rally rides in the MX-5s and Peugeot 205s on the Airfield at the Rock Barracks Open Day, to raise money for Help for Heroes. I can remember it raining all day. In the afternoon. They let me have a go in an MX- 5, but being new to Javelin, conditions being wet and being in a car I wasn’t used to, I took it easy and I didn’t get that buzz we all know about!

Fast forward to 2010, I introduced Cheryl, my partner to track day marshalling. On one track day after it had finished, Cheryl was asked if she could pick some cones up in the Mazda. I can remember being on the Hanger Straight and Cheryl stopping beside me and her words were “I like this!” Oh no, I thought…!’

For the next few weeks or so Cheryl was on the internet looking at MX-5s and all I got was ‘Can I have one? Can I have one?’ The reply was ‘No, no and No’…Someone told me don’t do it, it’s a ‘hairdresser’s car’, then it dawned on me, I could do track days in it!! Hmmmm. I still kept saying no, well you know what us blokes are like! I secretly looked on the internet, saw a red Mk 1 for sale which looked like it was in front of a Woodbridge Hanger. 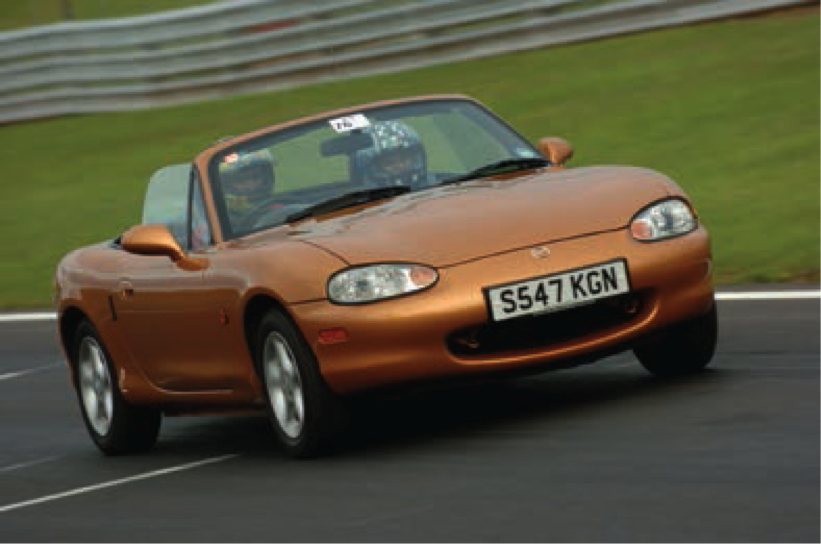 I then found out it was owned by Colin from Javelin Trackdays. I let on to Cheryl, so at the next track day while chatting to Colin, he said ‘You can buy my wife’s car if you like, it just sits there.’ Cheryl kept saying ‘Can we have it?’ and I kept saying no, but deep down I wanted it. After a week or so I caved in and of course, I was the best boyfriend ever and still am…!

The next track day was at RAF Sculthorpe. On the day before as we set up for it, Colin brought the car for us. We had a chat with Colin’s son Andrew who is an engineer, about the mechanical side of the MX-5 and his experience from that side of things and track days and my expectations about the MX-5 just went higher. The next day I was allowed to drive it to RAF Sculthorpe, the only other car I have driven like it on the road is a Lotus Elise so it was the only thing I could compare it to – well say no more! The first thing I noticed was how responsive the turn-in was.

For Christmas that year, I bought Cheryl a membership for the MX-5 Owners Club, so we attended the first meeting of 2011 at Norwich, and were made to feel very welcome. We had a chat with Jamie and he showed us the dates of the meetings and at the top of the dates list was the Eastern Region logo. I thought to myself I’ve seen that logo before! Looking at the dates we saw that the first one of the year was a Javelin Track day at the brand new Snetterton 300. Then it dawned on me that I’d seen the logo on YouTube on Project Merlot at RAF Woodbridge. We told Jamie that we marshal for Javelin and so the ice was broken.

We went along to Snetterton to have a look and Ken kindly took me out for a fast lap ride, which was great fun! The first Run we went on was the Thetford to Cromer Fish and Chip Run, and it really gave us a buzz being out with all the MX-5s. In April we were asked if we could marshal at a new track day venue at RAF Cottesmore.

Well, you didn’t have to ask me twice and what an experience it was. I also did 5 laps in our MX-5 which gave me a smile ear to ear! I also took the MX-5 out on track at Snetterton 300 and my first thought on the new layout was just that it was alright, I think I kept comparing it to the old layout, but the more laps I did, the bigger my smile got. I found Agerstines difficult as I found second gear too high and third too low. I really enjoyed the old Corham but I can see why they changed it. 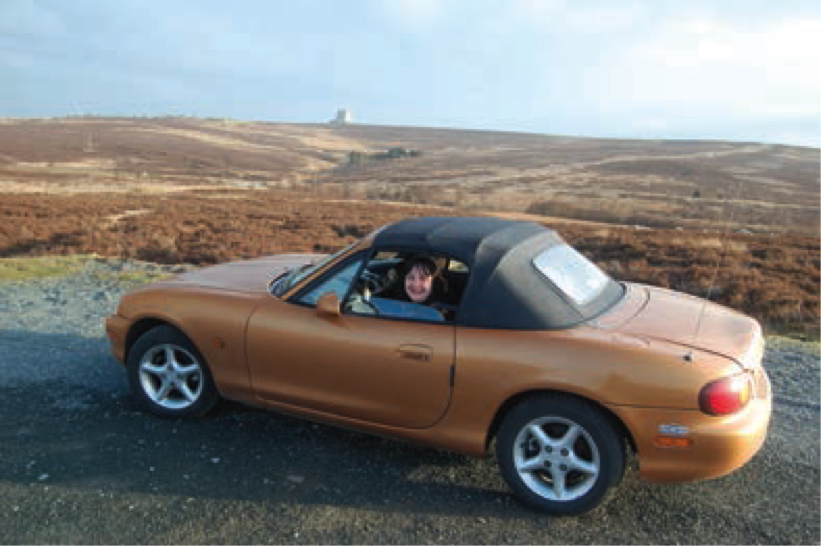 The Ma5da MX-5s racing there was the best racing I’d been to for ages and I got to have a slowish drive around the 200 circuit at lunchtime. I really enjoy track day driving. At the end of the year at RAF Woodbridge they did a sprint, in the morning. We did a few timed runs in an MSV Track day trophy class winning BMW. What fun that was. It was like all my Christmases had come at once! In the afternoon Cheryl brought the MX-5 down. I did three runs in the MX-5 and Cheryl did a lot more. At the end of the day Cheryl beat me by a small margin. When Cheryl got the quicker time, (me being a big Mark Webber fan) someone said on the radio ‘Not bad for a number 2 driver!’

At the beginning of March this year, I took Cheryl to Goathland in North Yorkshire for her birthday, which is a place we both enjoyed. On Cheryl’s birthday, I took her for a drive in the MX-5 up in the moors on the old Roman road in the middle of nowhere. I pulled over and I had an extra present hidden with the spare wheel – it was an engagement ring and I asked Cheryl to marry me. Guess what? She said Yes!

In June, we went on a1713.3 mile road trip to Scotland and stopped at Yorkshire on the way back. On the way to Yorkshire they closed the A9 so we had a diversion and a 7-hour journey took 12 hours, but when we got out of the MX-5 we didn’t feel stiff or sore. So another good point for the MX-5.

I really enjoy being a Mazda MX-5 owner and a Club member. Being part of something I enjoy, valeting the car ready for runs and shows and feeling proud of what I have worked hard for, meeting and chatting to new people. It’s also close to something else I enjoy – yep, motorsport. It’s also something Cheryl and I enjoy together!

Oh yes, one last thing. I need my hair cut. Does anyone know any hairdressers, because they all drive an MX-5, don’t they?!

This article was first featured in the October 2012 issue of Soft Top Hardtop, members can access the club’s archive going back to 2012 in the members area by clicking HERE.