Keeping the ‘tin-worm’ at bay

This article was written by Norman Hughes from the Milton Keynes area and was first featured just over six years ago in the December 2012 edition of Soft Top Hardtop, which if you’re a member you can read HERE. If you’re not a member then please join the club for more great technical help.

Like many contributors to STHT I am a relative newcomer to the delights of the MX-5. I can blame both my son and my wife in equal measures. I am what some call “semi-retired” (which means you work the same amount for less money) and have been extending my mid-life crisis for about 10 years or more by returning to motorcycling.

However, modern bikes and cars do not lend themselves to “tinkering”, my most enjoyable pastime, so how would that gap be filled? The spur for a solution was my wife’s increasing reluctance to travel as pillion on my bike. Don’t get me wrong, she does not distrust me as a biker – just all the other road users and an increasing awareness of vulnerability on 2 wheels. My son then entered the picture; “If Jan doesn’t like travelling on the bike any more, why not get an open-top car and you can enjoy it together?” This was rapidly followed by my wife saying “Now you are working less, you really need a tinkering project to keep you busy”.

The thoughts churned around in my head and the inevitable happened – I sat at the laptop and started to scour Auto Trader. What could it be? The Honda CRX coupe was considered (I’ve always been a Honda man) but this was a closed car. The S2000 was briefly in the frame (far too expensive), then the Toyota MR2 was a possibility (but most were Targa roof versions). Of course the inevitable outcome was the MX-5.

After much searching I found what I considered the ideal “project” car. A 1990 Mark 1 in white with genuine 46,000 miles (all MoTs to verify) in good order and at the right asking price. The snag? I was in Bedford and the car in Glasgow! Luckily, a neighbour was driving to Scotland on a business trip and offered to drop me off on the way – perfect. Armed with a stash of cash (I had already decided this was the one) off we went. The first learning point was painful. I was prepared for some work, but this car was a dog! 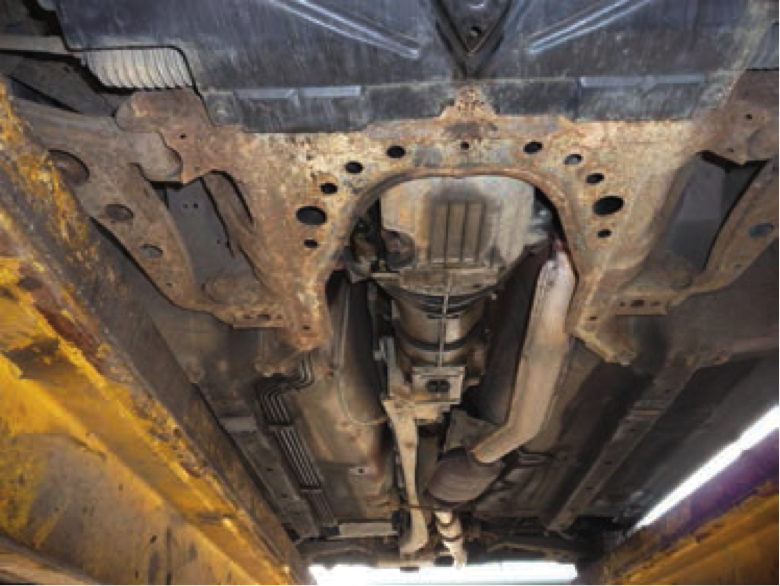 Yes, the mileage was genuine, but there was really nothing good about it at all and common sense said – walk away. So I did. Unfortunately my neighbour was long gone and I had no exit strategy! One expensive train journey home later, I planned future viewings with an exit strategy – on the assumption that I would NOT buy, rather than the other way around. Fast forward a couple of weeks to the next viewing. One potential car looked really good; low mileage, current owner of the last 7 years emigrating, price negotiable, everything standard and working properly. Yes, a few surface rust patches and one small repair on the sill but overall in great shape for a 21-year old car. Even better it was a UK spec car and in Classic Red – perfect. Offers were made and the deal done.

So began my “tinkering” and regular scouring of eBay for replacement parts and other essential “bits and pieces”. Several months of pleasure followed. The car was so good that I decided against my amateur bodywork repairs with an aerosol can and entrusted my local bodywork man with doing a “proper” repair to the rear arches and other faded paintwork. The car came back looking as good as new. However, I knew what lay underneath! 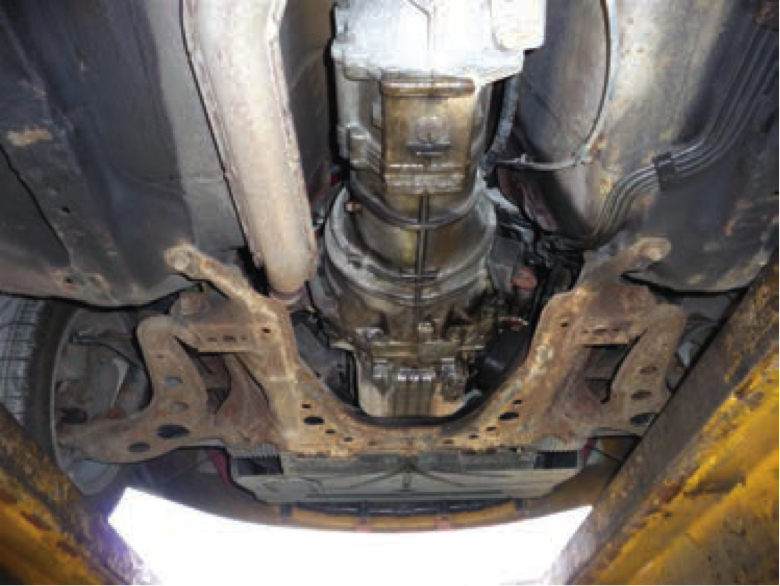 There was nothing serious of course. The car had recently had new springs, new rear calipers and discs and a new rear exhaust, but there was the expected surface rust. All the sills and chassis rails were sound, plus all the subframes and suspension wishbones. Nevertheless the MoT tester had put on the advisory “surface corrosion but not considered serious” for several underbody components. I had already committed myself to tidying this up before the next MoT and to do justice to the shiny bodywork on top.

No significant work commitments were pending so I had mentally allocated most of August (it would be warm and sunny in England of course) to lying on my back under the car with a wire brush and a big tin of black Hammerite.

Not fun but necessary. Two things then happened. Firstly, I received a copy of the classic car newsletter from the Civil Service Motoring Association (CSMA) that I’ve been a member of for many years. This had an article about Rustmaster (UK) that caught my attention. Secondly, a work assignment in the Middle East came up which required me to be out of the UK for most of August, so my master plan needed revisiting. Rustmaster (UK) has 2 UK locations (Cheshire and Hertfordshire), specialising in professional vehicle rust-proofing and using Waxoyl products. Everyone has probably heard of Waxoyl, the stuff we all used in spray cans years ago for DIY proofing, but Rustmaster (UK) use industrial grade stuff as used on oil rigs and similar. They have an exclusive licence from Waxoyl AG in Switzerland to use the professional products and system in the UK. These products when applied by their trained operatives offer a 5-year warranty with free annual checks and top-ups.

My first thought was “Interesting, but too expensive for an old car. It will cost more than the car is worth”. Still, the number of likely days available for my under-car activities was dwindling so I dropped a quick email to Nick Gresty, a Director of Rustmaster (UK) and tentatively enquired about the cost. I then justified to myself that the recently acquired work assignment (and hopefully income) could justify getting the underside done in a slightly more professional way.

An appointment was duly made and I met with Nick at the Knutsford depot. Initial impressions were favourable and I was invited to stay and observe the process (which would take about 5 hours). Firstly the car went up on an external lift for inspection. Obviously if there were serious areas needing welding or other repair this would have to be done before treatment. Mine looked generally OK but with the usual accumulation of surface rust and road grime. This was followed by a power wire brush treatment (industrial version using a compressor) to remove any significant surface or loose rust, and finally a full underbody clean with a superheated high pressure water washer to get loose rust and dirt from nooks and crannies.

The next stage (after an initial drip dry) is a full compressed air drying of the underside, including all box sections. Bone dry is not necessary as all the Waxoyl products used are water displacing and injected under pressure so you can be sure that everything is covered. Preparation (which really is the most important phase) was now complete and the car was transferred to the workshop for treatment. A 4-point lift on the chassis rails is used to ensure that all underbody and wheel arch areas can be easily reached. All box sections (chassis rails, crossmembers, subframes, sills, wishbones, etc.) are treated with a clear wax spray which is injected at high pressure as a “mist” coating. 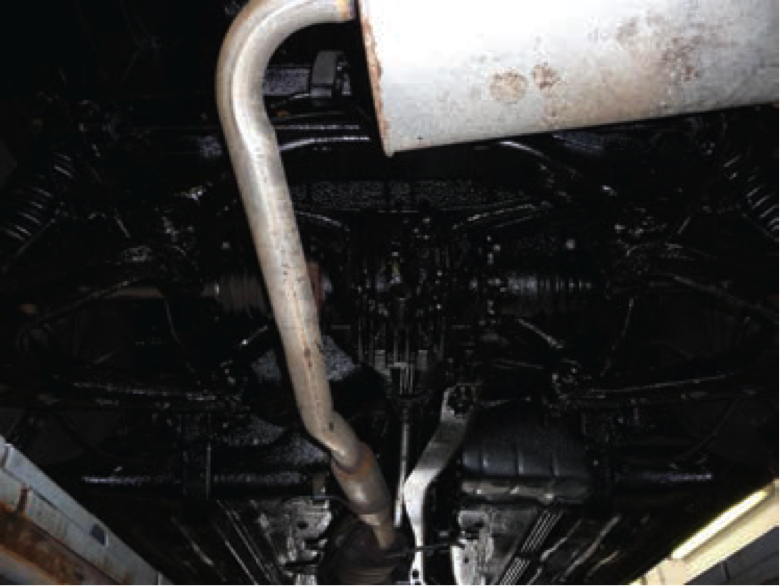 This penetrates any existing rust and prevents further rusting – important when corrosion so often appears from “inside out”. No holes are drilled as access can be made through existing points, such as drain holes and courtesy light switches.

With internal cavities done the wheel and brake areas were masked off in preparation for the main coating. Again using a high pressure spray the entire underside area (apart from the exhaust) was covered with a thick black hard wax coating, which resembles a traditional underseal. However, this Waxoyl product penetrates and kills existing rust, remains flexible and can be “topped up” with additional treatment if worn or damaged. As you can imagine this process takes some time to complete and Ben (who did my car) was very thorough and careful to make sure every bit was covered correctly.

With all the work completed the warranty was issued (and windscreen sticker applied), masking removed and the car handed back over. There was some residual waxy smell, but with the hood down on the way home it was not noticeable.

Was it all worth it? Only time will tell but I’m looking forward at the next MoT to having no advisories about “surface rust but not considered serious”. At the very least I know the underside is sound, I know all surface rust is removed, what remains has been “killed” and future corrosion slowed down, at least for the next 5 years. And the cost? Well I know that Nick offered a 10% discount to CSMA members and the whole treatment was £325.

Perhaps with a bit of persuasion he’ll offer the same deal to members of the MX-5 Owners Club. I must stress that I have no links with Rustmaster (UK) other than as a satisfied customer. 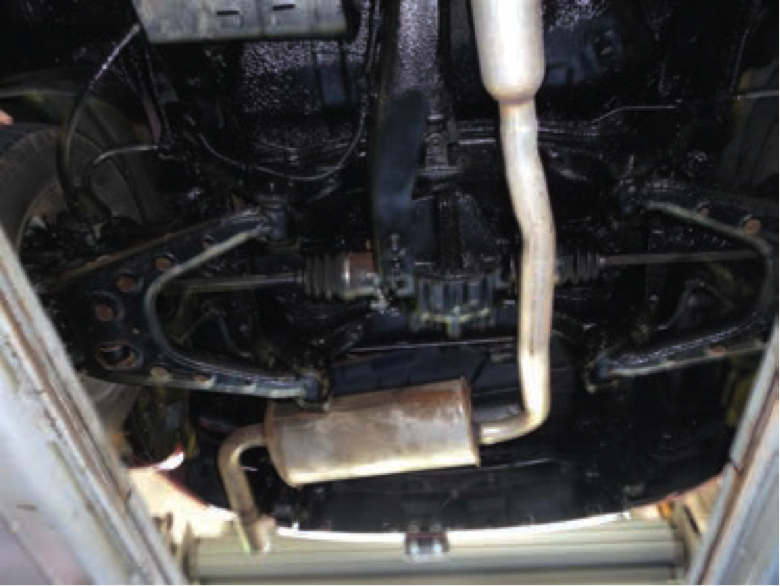