It’s that time again when the MX5 loving creatures of the night (nocturnal for the posh people), throw off the debris that the course of the working day has painted them with, unfurl their wings and set about taking to mystical channels of black lane highway, in other words it’s TIME FOR THE ANNUAL FISH AND CHIP RUN!

Arriving early evening in Swansea Services off J47, yes the M4s last gasp saloon, the enthusiasts of a similar species gathered together for the initial comparison of cranks, big bore pipes and all things orange that are due to arrive on our terra firma in August.

There were new faces present both very young and those that were maybe the more seasoned motorists, but all extremely welcomed for the evening of cod, chips and Castrol GTX. Mrs Whitely was so transfixed by the intimate gathering that she slipped into a semi state of consciousness, she was however unceremoniously awakened by a passing handsome prince which sent her into hysterical raptures, immediately bringing her out of her induced slumber.

The air was tinged with excitement as the final pit stop visits to the services were made and the collection of 18 MX’s and their passengers (as confirmed by Mr Ward) revved up their engines, whipped out their maps and one by one left the meeting point, heading into the warm summer evening for a relaxed meander to their fish n chip feast of magnificence.

On the now well-trodden route, the cavalcade proceeded happily without adverse event, over hill and down dale encountering some lush examples of the scenery that our green and pleasant land has to offer, painted by an orange setting sun that coloured the sky in tribute to the 30th Anniversary Star.

Anyway, enough of that, grub time and the comradeship that was shown but an hour earlier was lost as an all-out battle for the bar ensued. Elbows and rib ticklers were seen as the fight for service, food and alcohol commenced.

Once all were seated in Lloyds we were treated to the usual high standard of delicacy, sauteed with laughter and dressed with lashings of Corona lager. Some were served a little late, receiving their food when others had already finished theirs, but this is fine detail and did not detract from the celebrity of the occasion. As one of the attached photos show, we did learn something ever so special about one of our co-ordinators. Say nothing is best. Gents next door Mr Whitely!

Fed and watered the members finally drifted off individually into the humid night. A night that was peppered with flying insects, some of these being even louder than Mr Moores exhaust pipe as they struck the front of the homeward bound vehicles.

A sincere thanks to Mr and Mrs Ward (Gary & Brigitte) for putting on the Fish fest event once again, so same time next year guys.

I will have these alloys off here! 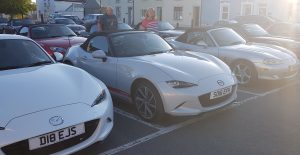