The sun begins to set on everything that is the colour orange now, and what was once a proud and domineering tangerine coloured “rock of discussion” begins to melt into what resembles a once licked sorbet that has fallen onto the shoes of the lucky few and then dribbled away. In other words, orange fever has calmed a bit now and the owners can now revel in the delights of their purchases “harassment free” (with additional accessories and number plates included).

The heads of those that engaged in alcohol fuelled frenzied evenings at the recent National Rally in Gaydon begin to clear (just), bringing a sense of reasonable normality and indeed tranquillity back to the South Wales MX5 Owners club, and its run time again.

Sorry scrub that, scrub it, it’s Ann and Bobs run so nothing will be normal here then!

This run is an annual event on the calendar that never ceases to disappoint. Although it is not always blessed with the best weather over the years, a bit of air moisture never fails to detract from the stunning scenery along with the intriguing routes that this part of the world has to offer us.

The starting point for the 27 vehicles in attendance for the run was Morrison’s car park in Carmarthen. 27 prime little vehicles that had been lovingly cleaned, hoovered and polished by proud owners to within an inch of their lives the night before, sparkle in the morning sun (through the rain that is). Oh how this shine would diminish as the events of the day unfolded.

After some engaging roads for the first part, the initial “pit stop” is at the Dyfed Shire Horse farm, a location that had been frequented only a couple of weeks earlier by those club members that participated in the excellent annual Pembrokeshire car run. For those of you that have been here previously, you will be aware that when we park up at this venue the rush of bodies is like when they have the “late evening mark down” on the out of date stuff in Asda. The reason for this madness is the limited toilet availability.

You can always tell MX5 drivers in the Shire horse farm as some are twisted up and lean to the left as they cannot straighten after travelling for an hour in the small cockpits of their cars. Some others, when they get together in a line, resemble the closing scene from “Riverdance”, all lined up in a row, legs bobbing up and down, trying to stem the flow in the queue for the ONE or if you’re lucky TWO toilets available on the site. “I told you not to drink that second can of Tango Margaret!” Too late!

During the course of the run there were a couple of standout events, firstly the “Event of the off roaders”. A missed turn resulting in around 16 cars doing the usual “sheep follow activity” and becoming wedged together in a very narrow lane. This required some precision and indeed well impressive manoeuvres to turn the cars around to get back on track. Soiling did occur at this stage, and I do mean the cars (I think).

New long and loving relationships were formed with bushes, trees and ferns at this meeting in the lane and I did hear that Andy and Sharon are now getting birthday cards from a very nice gate they met there. Whilst me, well I am now engaged to a “ditch”. Our eyes met across a muddy field and after that I knew she was the one. I entered her backwards…until the back tyre of my MX dropped deep into her heart (yes that same cheap budget tyre that loses its traction every time it rains causing wheel spin and skidding – oh yes, you get what you pay for!).

Anyway back on the road, all is well and the run continues, the rain still pours and dare anyone speaketh about the sun coming out? Dareth them not! Gary and Brigitte “had it off for a short period” during the run and at one stage I was going to offer them a bottle of Radox, just to “make the moment in the rain”. How brave.

Whilst on the coast road, we witness an event that will surely live on in the memory. All cars were stopped overlooking over the sea, the sun breaks through the clouds sending a dense rainbow down directly into the ocean, it’s not there for long but it’s one of those moments in time that make it all worthwhile.

And now to the dirt. Although we thoroughly enjoyed a wonderful trip as usual following the efforts of Ann and Bob, sadly it has taken some of the shine away from the once pristine vehicles.

At one stage I believe we did actually travel through an open cesspit as all the vehicles resembled Lester Piggots back after his horse got out of the compound the night before and stuffed a whole year’s supply of prunes. Yes the cars were plastered in sh…. stuff you can put on your rhubarb…..ah how we love the smell of petrol fumes and cow dung of a morning. Bob get your hosepipe out we have some jobs for you!

After another pit stop the run is over, fab, the last gasp of the day taking us across the coast road in Amroth with weekend visitors accepting us all as usual with smiling faces? We feed as we do annually at the New Inn where the sun kindly decides to give us some of his time just as we are about to leave. All seem happy.

As usual a warm welcome to new friends that joined us for this run, but it can be said that culture levels have dropped recently, so I would like to close off events today, with a poem to boost cultural finesse, a tribute to all of those that may not have quite yet realised that the direction sheet that they are given at the start will be their best friend and definitely not the car in front!

An ode to Baa Baa

Bunched up and heading outward
All following, none to pass
Run leader up the front end
And the slow ones up the…back end.

But some don’t read instructions
Not a glance, not even a peep
They just stick behind the car in front
And follow it like lost sheep.

We are stuck up a big mountain
When we should be in the town
And the road it is so narrow
How the heck can we get back down?

It’s all a part of club life
Go take it on the chin
We all get lost, don’t give a toss
Just face it with a grin.

And you could look a silly fool. 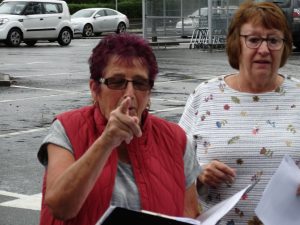 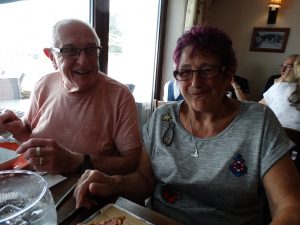 I love you so much! 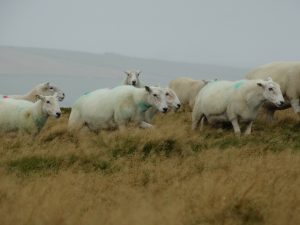 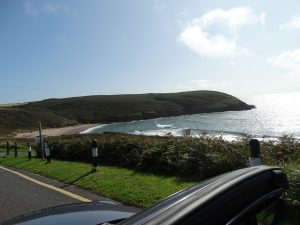 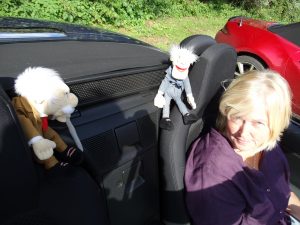 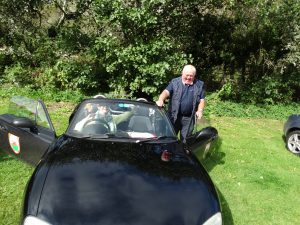 I remember when this was all fields….woo it still is. 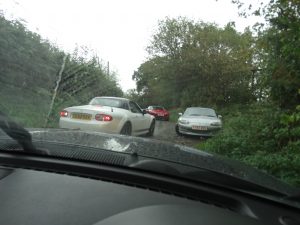 How did we get in this knot? 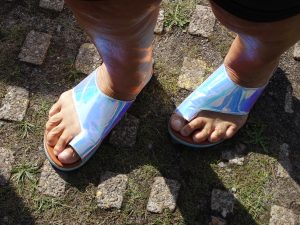 Best daps for the day! 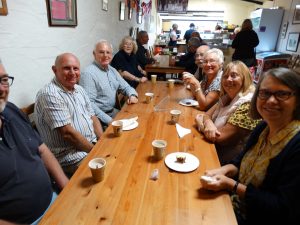 Don’t think they are gunna feed us. 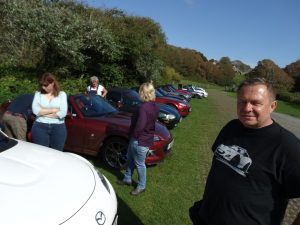 Got a new one. 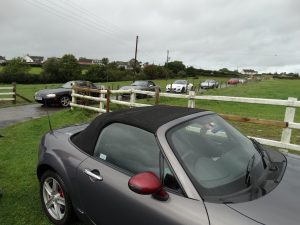 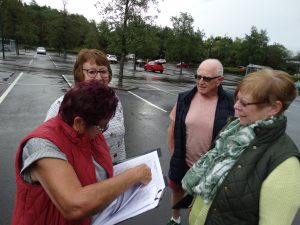 So if we turn right then right again, no left..I mean right. 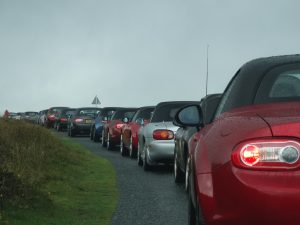 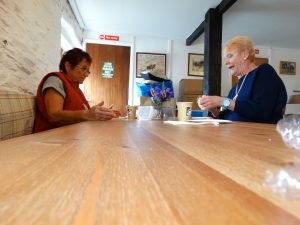 And it went all up the side of the car!
What did?
The sh… 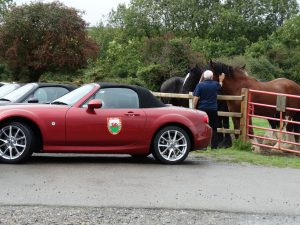 Wonder if they will notice if I put the bugga in the boot?