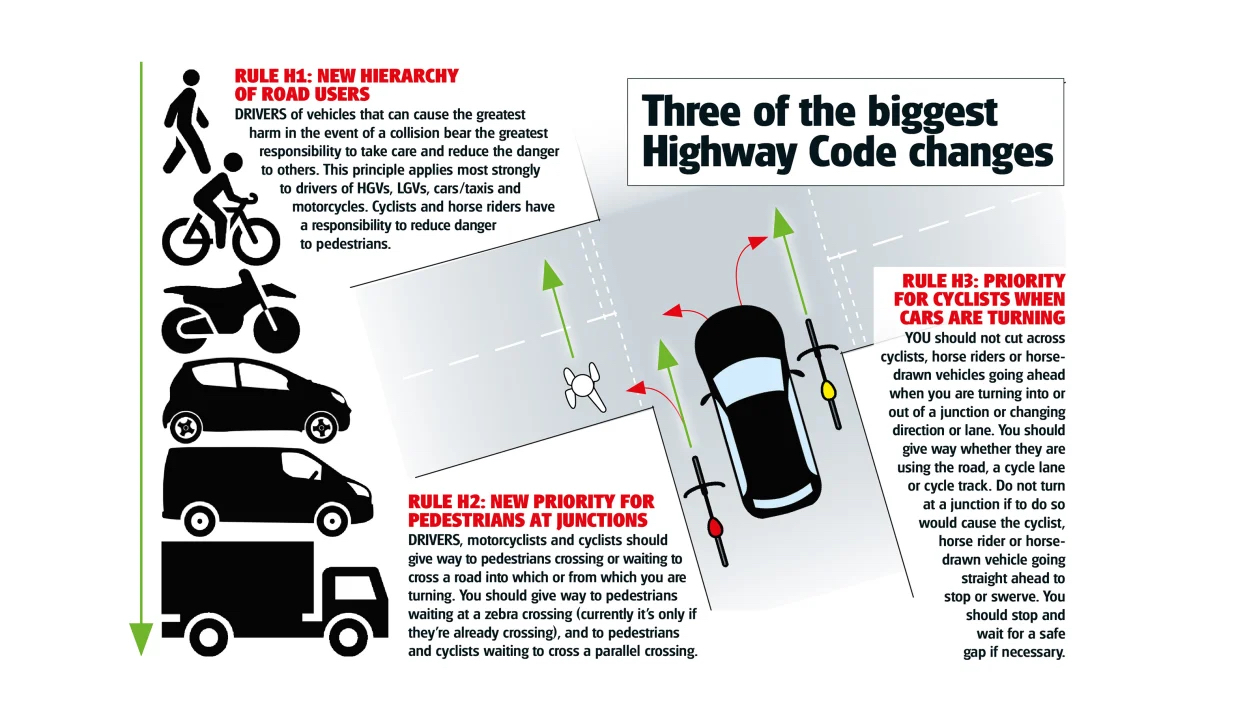 Do you know the new road rules for cars, cyclists and HGVs?

Highway Code updates coming into effect from January 29, 2022 may make it easier for drivers to be prosecuted over accidents involving pedestrians and cyclists. From 29 January, pedestrians will gain new priority when crossing road junctions, while cyclists will have priority when passing a turning car, under a new hierarchy of road users.

The online version of the Highway Code is being updated immediately, but physical copies containing the new rules won’t be available until the spring. Although the DfT has established a working group to decide how the changes should be communicated to the public, there is a concern that there is a lack of advertising to increase public awareness of the new rules. The Association of British Drivers, is proposing that the Government looks into sending every household in the UK a physical copy of the updated Highway Code.

What are the 2022 Highway Code changes?

Rule H1: New hierarchy of road users Drivers of vehicles that can cause the greatest harm in the event of a collision bear the greatest responsibility to take care and reduce the danger to others. This principle applies most strongly to drivers of HGVs, LGVs, cars/taxis and motorcycles. Cyclists and horse riders likewise have a responsibility to reduce danger to pedestrians.

Rule H3: New priority for cyclists when cars are turning You should not cut across cyclists, horse riders or horse drawn vehicles going ahead when you are turning into or out of a junction or changing direction or lane. This applies whether they are using a cycle lane, a cycle track, or riding ahead on the road and you should give way to them. Do not turn at a junction if to do so would cause the cyclist, horse rider or horse drawn vehicle going straight ahead to stop or swerve. You should stop and wait for a safe gap in the flow of cyclists if necessary.

If you are involved in an accident, enforcement of the law is a matter for the police who will decide on the evidence of each individual case, whether an offence has been committed and the appropriate action to take.

Comments from Institute of Advanced Motorists
“IAM RoadSmart are concerned the new Highway Code will increase conflict on the road rather than reduce it.  Informing every road user in the UK about the new rules will be a huge task particularly when most drivers think they are competent and don’t need to refresh their skills.
Getting the communications right will be critical when some cyclists start exercising their new rights to undertake traffic and put themselves at risk.
Vulnerable road users deserve the highest  protection from motorised vehicles but simply changing a book no one reads is unlikely to deliver the impact hoped for. In our view investment in segregated facilities remains the best way to encourage people to consider active travel as a real alternative.” Neil Greig, Policy Director, IAM RoadSmart.

Comments from the AA
“The upcoming changes to the Highway Code are a reminder that all road users have a responsibility to look after one another, in particular the most vulnerable ones: pedestrian, cyclists, other two-wheeled transport and horse riders.
“The encouragement of more ‘active travel’ and a boom in deliveries by people on bicycles has transformed road use to some extent, and the Highway Code needed to be updated to reflect that.
“As most people do not read the Highway Code once they have passed their test, all drivers will need to ensure they read and understand the new rules before they become live in January.” Edmund King, AA president.