In view of the latest announcements re the spread of the Corona virus and the fact that many of our members are in the at risk age group, I have decided to cancel this Sunday  run along with all runs for the forseeable future.

Starting from Moorlands at Owler Bar Sheffield S17 3BQ, meeting at 9:30, leaving at 10:00  our destination is The Lion Salt Works in Marston, Cheshire.

The Lion Salt Works is a restored historic open-pan salt making site, in the village of Marston, close to Northwich. The site lies adjacent to the Trent and Mersey Canal, close to Weaver Hall Museum and Workhouse, and the historic Anderton Boat Lift.
This £10.23 million project opened in June 2015 offering a fascinating journey through the life of the country’s last open-pan salt making site.

When exploring the site and its restored buildings, you will discover how the salt works operated and the impact of salt on mid-Cheshire’s people, economy and landscape.

Group admission rates have been negotiated, a guide for a conducted tour has been requested

As usual members (and prospective members) are welcome to join or leave an any point, please let the organiser know if you intend to do this so we are not waiting for you, and if you are leaving mid route, ensure that the cars behind know you are leaving the convoy, or you may find you have extra guests at your house for tea !!

A route card will be added here on or before Saturday night, please print it out and bring it with you, this is a health and safety requirement.

The mileage from Moorlands to Marston is approx 50 miles, as a guide the return mileage to Meadowhell via the motorways is approx 60 miles

A bit more about the venue

History of the museum

Salt-making in Cheshire dates back over 2000 years, when the salt towns of Cheshire were first established by the Romans. Originally salt was extracted from the ground by a series of natural brine pits. In the 17th century the first of a series of mines were begun in the Northwich region but were exhausted around 1850. The exhaustion of the mined rock salt supplies resulted in a change to wild brine pumping. The brine was pumped out of the ground to supply the salt works based at the surface. By the late-19th century brine shafts and traditional open pan salt works dominated the area around Northwich, many controlled by the monopolistic Salt Union.

In 1894, Henry Ingram Thompson, constructed a new salt works that became known as the ‘Lion Salt Works’. The new company quickly built a series of pan and stove houses. The salt works ran on the site for almost 100 years.  The outbreak of the Nigerian Civil War (1967 – 1970) saw the loss of a major market in West Africa and the eventual closure of the works in June 1986. 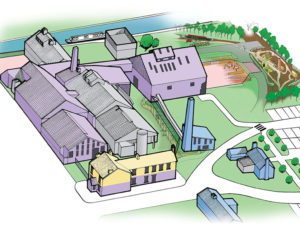 Start your adventure in Stove House 5. The ground floor houses the café, shop and ticket sales, whilst the top floor has a flexible conference facility available for hire for meetings, conferences and events. The ground floor includes a timeline of salt production in Cheshire, an introduction to the geology of the site, and tells the story of the Thompson family, who owned the Salt Works. There are also displays on the life of the Salt Works’ workers, with recreations of the Managers’ Office and Red Lion public house. The top floor of the building is used for formal learning and is not open to the public. Stove House 3 tells the story of the production of salt, from its extraction as brine through to it being packaged on site. Explore the evolution of the site as an operating salt works, from its early years to its closure in 1986. See the original salt pan, lofting holes and crushing machine. Learn about the science of salt, including salt crystal types and salt corrosion. Stove House 2 tells the history of the changing landscape around the Lion Salt Works. It explores a range of salt related habitats and the different species of wildlife they contain and links to other areas like Marbury Country Park and the canal. Follow the story of the Lion Salt Works restoration from 2011 to 2014 through the voices of the Project Archaeologist, on site contractors and local residents.